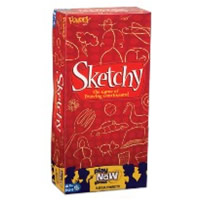 How To Play Sketchy (Instructions)

If you like drawing or can't draw at all, Sketchy is a fun party game to get everyone involved. No talent is needed. Sketchy game players race against the clock trying to draw items from a category. They then try to determine which of their partner's drawings actually matches their drawing. The Sketchy team that can get the most matches wins the game.

Sketchy is a favorite at social activities and is fast paced to keep your party alive. Not being able to draw very well makes Sketchy more fun. Pick up your Sketch game and try playing it with your friends or family today!

The game Sketchy should come with the following components. These are based off of the original game and don't include components from any expansion packs or different editions.

Create drawings that match those of your partner.

Please keep in mind that the official Sketchy rules and instructions could be different depending on the game version you have. The rules below are some of the exact directions that came in the original packaging and will teach you how to play Sketchy. Download these original PDF game rules or print them for later use.

Share with us your comments, funny stories, tips, advice, strategies, creative ways to play, questions about how to play, problems with the directions or anything you want about Sketchy. All submissions will be reviewed within 24 hours.