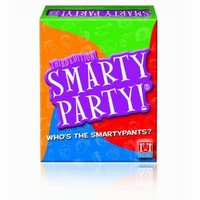 How To Play Smarty Party (Instructions)

In the game of Smarty Party you're going to be matching your wits against your opponents to see who can come in...last. During each round of play in Smarty Party, players must give an answer that fits the current category. If you give a wrong answer you get penalty points, but if you give the correct answer then you are rewarded with the Smarty Pants!

At the end of each round penalty points advance your piece along the board. The game ends when the first player reaches the Game Over. And...whoever is in last place on the board wins the game of Smarty Party. Try playing Smarty Party with a large group and see how much fun you can have trying to win, while losing the game.

The game Smarty Party should come with the following components. These are based off of the original game and don't include components from any expansion packs or different editions.

At the end of each round of Smarty Party, Penalty points advance players along the board. But the player holding the Pants gets to toss out one Penalty chip! The game ends when a player reaches Game Over... and last place wins!

Please keep in mind that the official Smarty Party rules and instructions could be different depending on the game version you have. The rules below are some of the exact directions that came in the original packaging and will teach you how to play Smarty Party. Download these original PDF game rules or print them for later use.

Share with us your comments, funny stories, tips, advice, strategies, creative ways to play, questions about how to play, problems with the directions or anything you want about Smarty Party. All submissions will be reviewed within 24 hours.

Doug says:
Not one of my favorite games. The rules were a little confusing and after we finished the game no one really wanted to play again or were thrilled by it. Maybe we're just not smart enough.
©2022 Board Game Capital - About Us