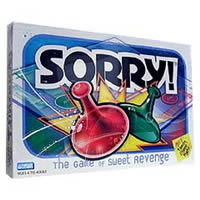 How To Play Sorry (Instructions)

The word "sorry" is the perfect way to explain the game Sorry. Sorry is a board game where players draw cards and try to advance themselves. Inside that deck of cards being drawn is the covetous Sorry card that allows you to send anyone you want back to start. It is a fun game but can get a little heated as players keep send other players back to the beginning.

Sorry involves a little skill and a whole lot of luck due to the fact that if you don't draw the right cards and the right moment, someone will say "sorry" and you are headed back to beginning. Revenge might be on everyone's mind but it still is a fun game to laugh about later.

To become the winner at Sorry, you must be the first player to advance all four of your pawns from your color Start to your color Home by exact count from the cards.

Perparation: Each player choose a color and places their color corresponding pawns on their color Start space. Make sure the deck of cards is shuffled and placed on the Sorry game board where it says "Place Pack Here." A player is then picked to begin and game play moves clockwise around the board.

Game Play: Each player begins his or her turn by drawing a card and moving according to the card they draw. To begin a pawn moving forward, you must draw a 1 or 2. It is against the Sorry rules to begin moving with any other card. You may jump over any pawn counting that space as a normal space. If your pawn lands on an occupied space, you bump that pawn back to Start only if that pawn is not your own. When a player has no possible moves available, they simply forfeit their turn. If you can move, you must.

If you draw a card that makes you move more than two spaces beyond your own Start space, on your next turn you may move into your own Safety Zone without moving all the way around the board. When the all the Sorry card in the deck are used, shuffle and reuse them.

There are several Slides throughout the Sorry game board. The instructions and rules stated that if at any time you land by exact count on a triangle at the beginning of a Slide that is not your own color, slide ahead to the end and Bump (sending them back to Start) any pawns that are in your way including your own. If you land on a Slide that is the same color as your pawn, don't slide; just stay put on the triangle.

The Sorry Safety Zones are only used by pawns of the corresponding colors. No pawn may enter its Safety Zone by a backward move; however, a pawn can move backward out of its Safety Zone and on following turns move back into their Zone as the card permits.

What do the Sorry cards mean? The follow is a list of the actions associated with each Sorry card during game play:


Please keep in mind that the official Sorry rules and instructions could be different depending on the game version you have. The rules below are some of the exact directions that came in the original packaging. Download these original PDF rules or print them for later use.

Share with us your comments, funny stories, tips, advice, strategies, creative ways to play, questions about how to play, problems with the directions or anything you want about Sorry. All submissions will be reviewed within 24 hours.

Optional:
4) Marked one of each single function forward cards (3,5,8,12) with an "R" which gives the option to move an opponent's piece backwards that number of places.
5) For a faster game: always slide when you hit an arrow then keep counting. Wipe out all pieces on the slide including your own.
Guest says:
This is the best game I've ever played in my whole life!! LOVE IT
Huge List Of
Free Board Game
Giveaways!