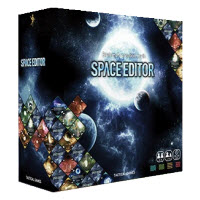 How To Play Space Editor (Instructions)

Great things come in small packages right? Space Editor is no exception with small square cards packaged in a nice small box. The possibilities, strategy and appeal to both easy going gamers and hardcore gamers alike make this card laying game a sure winner. Game play is similar to Dominoes in that cards are placed next to each other based on correctly matched symbols on the sides of the card. Special cards and different element abilities add to the "lets play again" factor.

Space Editor is a great game that may look intimidating at first but is a pretty straight forward and simple game to play. Although mastering the strategy and deck customization might take some time. Learn more about the game below and what we thought of it. Feel free to leave us a comment and be sure to check out and purchase Space Editor. 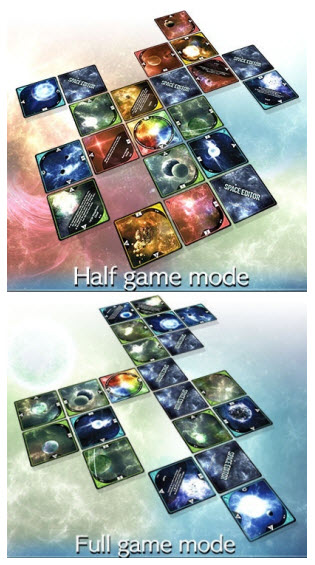 Talk about a huge game packaged in a little box with little cards. Space Editor is a tile place game that uses cards to spread out from a central basecard. It looks somewhat similar to Dominoes in the fact that certain cards can only connect to other cards and are laid next to each other. By strategically placing down your cards you can gain points, cause your opponent to loose points and even multiply your points with special combinations. Some cards also contain special abilities that put a fun twist on the game (move a card, rotate a card, etc.).

This game is a bit intimidating at first but we were pleasantly surprised that it can be a very simple and causal experience if you want it to be. There is also a definite hardcore side if you choose to go that route also. There are two different game modes (half game or full game) that control how intense the game can get. We liked this option so you can tailor the game to whomever you are playing with. Once you learn the basic rules of card placement and scoring, the game is quite simple with some fun lucky strategy.

Some other fun, unique, things to this game are each element has slightly different advantages so you could play the game four times (each time as a different element) and the game experience would be totally different. Also, the location of where you place the initial basecard has a large roll in the future of the game. If a card will fall off the table if you placed it, you cannot place that card. So for example, if you placed the basecard next to the table edge, you wouldn't be able to play off of one of its sides. 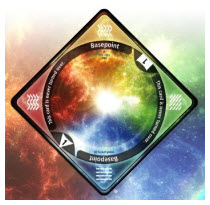 During your turn, you will be able to pick up two cards from your draw pile. What we found interesting is you have to strategically choose between the two and the card not used is completely discarded from that game. This essentially means that with your deck of 24 cards, you'll only have approximately 12 turns.

If that isn't enough, there are extra cards included with the game that let you customize your deck before you begin the game to potentially give you an extra advantage. Because cards are shuffled and turned face down, you'll never know what your next two cards are but you'll at least know which cards might be available in the deck. This option is best for those who have played and are very familiar with the rules and strategies.

In summary, Space Editor is a fun packed, space themed, possibility intense and strategically challenging game for the light hearted gamer as well as the hardcore gamers out there. It's a high quality game packaged in a small box with great illustrations and a thorough rule book (don't let it intimidate you). Space Editor is definitely a game you'll want to learn more about, buy, play and keep for years to come.

The game Space Editor should come with the following components. These are based off of the original game and don't include components from any expansion packs or different editions.

You're trying to earn the most points by the end of the game to be the winner.

Please keep in mind that the official Space Editor rules and instructions could be different depending on the game version you have. The rules below are some of the exact directions that came in the original packaging and will teach you how to play Space Editor. Download these original PDF game rules or print them for later use.

Share with us your comments, funny stories, tips, advice, strategies, creative ways to play, questions about how to play, problems with the directions or anything you want about Space Editor. All submissions will be reviewed within 24 hours.