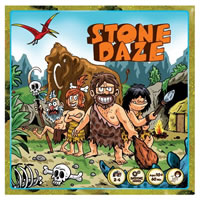 How To Play Stone Daze (Instructions)

The goal of the game Stone Daze is to provide a relatively easy to learn and play game for the whole family, yet give enough strategic depth to last for years to come. With a fun storyline and great illustrations Stone Daze is a must for your game collection.

You'll need to check out the Stone Daze rules and instructions to learn all the specifics about how to play. Basically, you are trying to reach the other player's Halhala before anyone else does and you'll win. Learn more about this game and let us know what you think by dropping a comment below.

Board Game Capital's Review:
(2017-07-11)
By no means do we claim we have seen every game out there but when we saw Stone Daze we were instantly excited. We were intrigued by the game design, the graphics and illustrations, the materials used and the potential for a great family game. There may be other games similar to this with a different theme and slightly tweaked rules but this one certainly caught our eye and we're excited to share with you our experience with it. 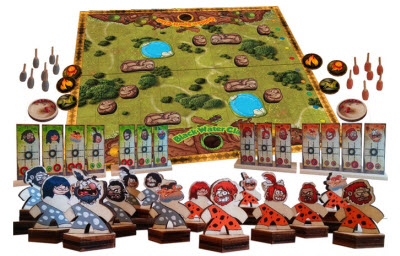 After picking up the game we noticed it was heavy and quickly opened the box. Inside we saw many fun and nicely decorated wooden game pieces, thick cardboard/magnet boards, stands, storage bags and a heavy duty game board. The materials used for the game pieces are so fitting given the theme of the game - cavemen times. We inspected the contents and found that they are very nicely built. We had two small complaints but we'll touch on that later in the review.

We were sent a sample game that isn't a complete representation of the finalized game. A few improvements are still being made that are definitely needed. Props to the creators for continually improving this game to make it the high quality game that it is.

No game rules were included in our box which will be in the final version. The PDF version listed below looks great. It is fairly lengthy (8 pages) which is expected for a game with such a wide range of possibilities. The mechanics of the game open it up to have infinite possibilities and a very high replay value. With slightly more complex games comes more strategy, engagement and entertainment. Stone Daze has just the right amount of complexity that it makes it moderately easy to learn how to play, but cranks up the competition as you try to reach your opponent's Halhala (or sacred place) first. At the beginning of the rules is a fun backstory that sets the stage for the game. Examples and illustrations dot the instructions clarifying and showing how each move works. Overall the rules are well written.

The basics of the game are players set up their playing field with obstacles (rocks and ponds), plan moves and attacks based on their character's special abilities on the awesome magnetic character boards, preform attacks, move to your predetermined areas, assess the damage and repeat until you have reached your goal. There is really no turn taking since each phase of the game is done at the same time. The first time playing took a long time and a lot of rereading the game rules. After the first game, we had just enough experience to be dangerous in the next round and found it far more enjoyable and challenging. We only had two people playing though up to four can play in teams. That could be a bit challenging as you try to secretly communicate and collaborate on your next moves, but we can see how that would change the game play drastically. You can either work fully together on every character or split your team in half and play as a co-op.

What we really liked is the family theme around this game. No blood and guts - just cute bumps on the head and simple club attacks. Build quality was impressive and the game experience was fun and competitive. Two and a half things we weren't particularly fond of are the very very small head bump pins. At times they were almost lost and even overlooked as the game board got busy. The second was the red/black move and action circle indicators. They are basically metal washers with paint on them which chips off very easily. This is a game piece which is being looked at and the creators are aware of the problem so we hope it improves dramatically. UPDATE: These will be fixed and are a nonissue in the production version of the game. The half complaint is unknown - we don't know how well the wooden painted piece will hold up as they are all thrown together in the same bag rubbing against each other. Time will tell and it may not be an issue but we thought we'd throw it out there (don't know how you could improve this one).

Overall, Stone Daze is an excellent game! It's no simple board game where there is no thought involved. You'll be strategizing, planning, trying to out-think and outrun your opponent, best utilizing the fun action tokens all while avoiding the dreaded club to the head. Kudos to the game developers for making a great unique game with an engaging hands on experience. Could there be a possible expansion where four clans can battle it out?...

The game Stone Daze should come with the following components. These are based off of the original game and don't include components from any expansion packs or different editions.

First person to reach their opponent's sacred place with any of their clan members will win.

Please keep in mind that the official Stone Daze rules and instructions could be different depending on the game version you have. The rules below are some of the exact directions that came in the original packaging and will teach you how to play Stone Daze. Download these original PDF game rules or print them for later use.

Share with us your comments, funny stories, tips, advice, strategies, creative ways to play, questions about how to play, problems with the directions or anything you want about Stone Daze. All submissions will be reviewed within 24 hours.

Dieter Polcher says:
High quality components and pieces come already bagged for storage which is awesome!! Great fun game and easy to learn!!!
Lior says:
Thank you for the comment. There are a few discounted pledge slots added, so you can save a bit more. Grab one before they run out again.
John says:
Looks like a really fun game. I'm really tempted to back this project and save some money before the price goes up and gets fully released to the public. Thanks for the review.
©2023 Board Game Capital - About Us