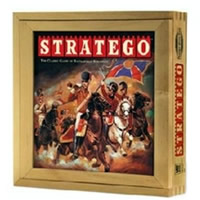 How To Play Stratego (Instructions)

Stratego is a game of armies and their battlefield. Each player's goal is to steal the flag of their opponent and to protect their own flag from being taken. The game board is the battlefield.

Each player has an army of men and some bombs that they can use during play. The army is used to steal the other flag and to protect your own flag. The bombs are used to make play a bit trickier. Players can attack each others pieces, but pieces can be bombs which will "blast" your piece from the board. Victory comes when a player can steal his opponents flag.

The game Stratego should come with the following components. These are based off of the original game and don't include components from any expansion packs or different editions.

The object of the game Stratego is simply that of capturing your opponent's flag.

Please keep in mind that the official Stratego rules and instructions could be different depending on the game version you have. The rules below are some of the exact directions that came in the original packaging and will teach you how to play Stratego. Download these original PDF game rules or print them for later use.

Share with us your comments, funny stories, tips, advice, strategies, creative ways to play, questions about how to play, problems with the directions or anything you want about Stratego. All submissions will be reviewed within 24 hours.

Josh says:
What happens if a sharp shooter shoots a siege mortar
Dennis says:
Thanks for the official Stratego game rules. I've seen some that were the original and wanted to be truly authentic in how I was playing. I didn't know there were so many different versions of this either. Anyway, good to have my own copy of the instructions now.
Raven says:
I've been playing Stratego since I was 12. I served in the Marines as a Combat Engineer and removing mines and mine emplacement was part of my duty. I also had my troops play to develop strategy. it was fun then it is fun now, Semper Fi
JenCutiePie says:
Love the game!
©2022 Board Game Capital - About Us