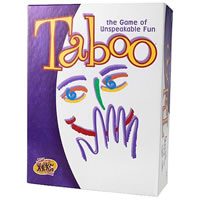 How To Play Taboo (Instructions)

Taboo is a think fast, talk fast, game where saying the wrong thing could make you lose the game. Get your team to say the word on the card without using one of the five taboo words listed on the card.

The Taboo cards have two sides in case you get too advanced. Get your team to say your word and get a point. The team with the most points wins. Test your fast talking skills and see how your team does. Taboo is a great party game that can entertain for hours. Check out Taboo for all of your large group activities.

The game Taboo should come with the following components. These are based off of the original game and don't include components from any expansion packs or different editions.

The object of the game Taboo is to score the most points by guessing the most words correctly.

Please keep in mind that the official Taboo rules and instructions could be different depending on the game version you have. The rules below are some of the exact directions that came in the original packaging and will teach you how to play Taboo. Download these original PDF game rules or print them for later use.

Share with us your comments, funny stories, tips, advice, strategies, creative ways to play, questions about how to play, problems with the directions or anything you want about Taboo. All submissions will be reviewed within 24 hours.

Random says:
If someone says "stuff" can you say "continuous tense" to tell them to say "stuffing"
Sydney says:
If there was a word on a card, i.e eyelash, would you be able to say eye? Or does that not count?
Shloyo says:
Can u say ____ when getting someone to say a word. For example if the word is "league" can u say national football ____ to get them to say league?
Jasmine says:
I tried to get my partner to say the word heel but, with all the proper context clues she wasn't saying it. So I took it out of the context of that word and started to name things in the context of the word "heal" and she said it. Does that count as a point?
Suzan says:
If a guesser says one of the taboo words on the list can you then, as the person trying to make your team guess the word, now say that taboo word?
Tj says:
If the word is fan can you say ceiling fan?
Sarah says:
So if you are the clue giver and you say a taboo word and a member of the opposite team doesn't catch it who gets the point? Are you as the clue giver supposed to give up the point and tell in yourself?
Kathrine says:
How much time does the each team get?
Lily says:
Very interesting. I came here to answer a question about one of the aspects of the game rules and noticed there were different versions of Taboo. I'll have to check them out. Thanks for the directions so we knew how to play correctly.
Holli says:
If the word is license and they say driver license would that count as a point?
George says:
It is my belief, with regard to the use of homonyms...... If the word is said, regardless of which version of the word was meant, the answer should stand as correct. Same goes for taboo words if you say a form of the word. Such as I or eye. They should both be viewed as taboo words since the pronunciation is exactly the same.
Alicia says:
If someone on your team guesses one of the Taboo words, is the clues-giver then allowed to use that word when giving clues?
Billie says:
How much time does the each team get?
Lyn says:
If the guess word is Thomas Edison and a taboo word is lightbulb, can I say lightning?
Lance says:
If the word is Kentucky, is Kentucky derby a acceptable answer
Ted says:
We need clarification. If the word is "byte" and the answer from the partner is bite (derived from "what do dogs do?) does the answer count as accurate?
Catie says:
Thanks for the link to the Taboo game rules. I was wanting to learn how to play the right way since my family likes to stretch the rules a bit and make up their own.
nana says:
We were playing the game the other night and were told we can't use the fill in the blank approach. For example, if the word is STAR, we can't say: twinkle twinkle little (blank). Is that right?
Susan says:
We bought a used game at a resell store and the timer is broken. How much time does the team get? Thanks!
Mark says:
The need to police the opposing side during their turn for "taboos" makes it a bit tedious. It means you don't get a break (IE, even when it's the opposing side's turn) and always have to be on.
©2023 Board Game Capital - About Us