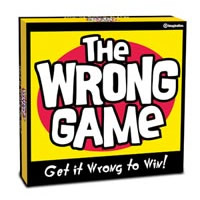 How To Play The Wrong Game (Instructions)

The Wrong Game is also filled with little challenges like the Right/Wrong cards which tell you to alternate between giving the right answer or the wrong answer. In this game, being wrong is right. Play the Wrong Game today!

The game The Wrong Game should come with the following components. These are based off of the original game and don't include components from any expansion packs or different editions.

The first player to win 30 tokens is the winner.

Please keep in mind that the official The Wrong Game rules and instructions could be different depending on the game version you have. The rules below are some of the exact directions that came in the original packaging and will teach you how to play The Wrong Game. Download these original PDF game rules or print them for later use.

Share with us your comments, funny stories, tips, advice, strategies, creative ways to play, questions about how to play, problems with the directions or anything you want about The Wrong Game. All submissions will be reviewed within 24 hours.

Sera Westbrook says:
What time do you think is within reasonability to have players put their answer?
Emma says:
The link for the instructions doesn't work! Can someone give me a brief run down of the rules?? I bought the game from a used book store and didn't realize it didn't have the instructions with it...
Marjorie says:
I'm trying to download the official rules for the boardgame, "The Wrong Game" and the link won't work. I bought the game used and the rules are missing! Can anyone help me with this? Thank you!
DalesWife says:
I have the same question as Melanie. Our timer broke before we even played it once. Sooo - what are the times for the red and black areas?
Melanie says:
I love the game. However, just like you warned, the timer broke after ther first game was played. How many seconds is the red side? How many seconds is the black side?
©2022 Board Game Capital - About Us