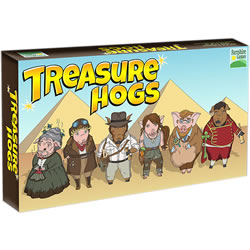 How To Play Treasure Hogs (Instructions)

In the game of Treasure Hogs, you can either be a hog finding treasure or a treasure hog stealing other hog's treasure. Play as Agnus Pigsty, Sir Hogsalot, Amelia Swinehart or Napigleon to name a few each with their own special ability. You'll be using tools like a pick axe, rope or shovel to help you in your treasure hunt. Special cards like smoke cloud, lantern and map help you along the way. Be the player at the end of the game with the most point and you will win.

Treasure Hogs is a fun card game with a lot of different twists to help keep the game fresh and fair. If you happen to oink at the same time as other players then you'll enter a thieving hog-tie battle. Game rules are easy to understand and won't take all day learning how to play. Each game lasts about 30 minutes and you'll definitely want to play again and again. Be sure to grab this game so you can add it to your gaming collection as one of your favorites. 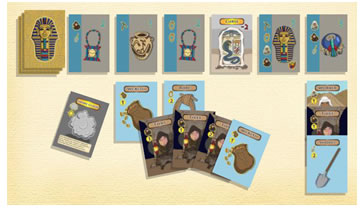 We honestly don’t think we have ever made the noise oink so many times in such a short period of time but boy was it fun! Treasure Hogs was a refreshing surprise after our initial thought of the game was a little corny and simple. This card game has some seriously good gaming mechanics and offers a really fun gaming experience. It has a nice balance of simple fun and strategy so you can be a hard core gamer or a casual gamer to have fun with this game.

We are torn on saying this or not since we can’t make up our minds if we like how simple the cards are or not. They do a fantastic job displaying everything you need on the card. They have a clean appearance with minimal graphics. The graphics that are present are nicely done. The game has a fun theme to it and looks pretty cool when everything is spread out on the table. It just feels like something is missing – one last little embellishment perhaps. Same thing goes for the game box. Both box and cards are nicely made though. The cards we received had a slight texture to them which was a nice touch.

Here are a few things we really like about how the game is played. We liked how you can discard cards that you don’t need for new cards. We hate being stuck with worthless cards in a game and this lets you keep a fresh hand with some more useful cards. We loved oinking for the steal and battles were a lot of fun. We loved being able to steal other’s hard work. The curses kept things interesting and forced your hand at times. It was fun having a special ability in your back pocket and being able to use it more than once during the game was a bonus. 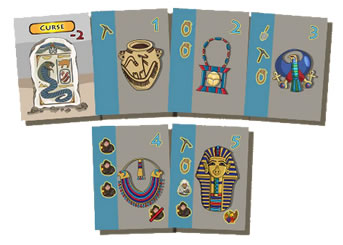 We didn’t receive a printed copy of the game rules with our review. The official rules we read online (and are listed below) did a pretty good job of explaining how things are played. Watching a game being played, however, will teach you much quicker. It’s one of those games you just need to watch for 5 minutes and you’ll catch on.

Treasure Hogs is now at the top of our newly invented and imaginary gaming list (also know as the game we really want to keep playing over and over). There is enough simple variety that the game play is so fun with a twist just around the corner. No one has won until the game is over and we felt like everyone had an equal chance of winning. Not knowing your score nor your opponent's score (until the end) helped you act more irrational which was more fun. Players who thought they were loosing actually turned out to win. We totally recommend this game to just about anyone. If you can get past the quirky hog theme and have fun with it then you’ll be playing this game over and over at game night.

When all Treasure and Curse Cards have been claimed, the player with the highest treasure-point total wins the game.

Please keep in mind that the official Treasure Hogs rules and instructions could be different depending on the game version you have. The rules below are some of the exact directions that came in the original packaging.

Share with us your comments, funny stories, tips, advice, strategies, creative ways to play, questions about how to play, problems with the directions or anything you want about Treasure Hogs. All submissions will be reviewed within 24 hours.


Shaun says:
I love this game and am surprised to see it here. It isn't a really well known game but has enough variety to it that it is a lot of fun to play.
Huge List Of
Free Board Game
Giveaways!