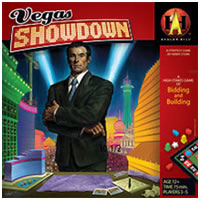 How To Play Vegas Showdown (Instructions)

Vegas Showdown is a game of competing to build the best hotel/casino with limited resources. Each player has “invested” in some land in the notorious Las Vegas. Players are given a specified amount of time to make their land into the most profitable hotel or casino they can. After the allotted time given, players must determine which hotel and casino is the most well-known.

Players must determine the perfect combination of amusements for their guests. Another important aspect of the “investment” is publicity to get people to come to your hotel/casino. Check out Vegas Showdown for a visit to one of the most notorious cities in the United States. Play Vegas Showdown today.

The game Vegas Showdown should come with the following components. These are based off of the original game and don't include components from any expansion packs or different editions.

The player to build the most "famous" hotel and casino at the end of the first year of play wins Vegas Showdown.

Please keep in mind that the official Vegas Showdown rules and instructions could be different depending on the game version you have. The rules below are some of the exact directions that came in the original packaging and will teach you how to play Vegas Showdown. Download these original PDF game rules or print them for later use.

Share with us your comments, funny stories, tips, advice, strategies, creative ways to play, questions about how to play, problems with the directions or anything you want about Vegas Showdown. All submissions will be reviewed within 24 hours.