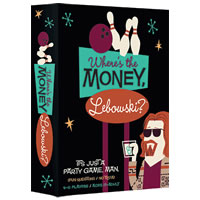 How To Play Where's the Money, Lebowski (Instructions)

Where's the Money, Lebowski? That's a loaded question, dude, and one of many you'll answer in this hilarious game of personal questions inspired by The Big Lebowski. Whether you have seen the cult classic film 0, 1 or 100 times, your enjoyment level and chance of winning are not an issue. It's just a game, man.

This game is great for an older audience with at least 4 players. Played similar to other "favorite answer" type games, this game has a few differences and twists that make it fun. Join in the fun and give Where's the Money, Lebowski a try today.

The game Where's the Money, Lebowski should come with the following components. These are based off of the original game and don't include components from any expansion packs or different editions.

The player with the most amount of money after three full rounds wins the game.

Share with us your comments, funny stories, tips, advice, strategies, creative ways to play, questions about how to play, problems with the directions or anything you want about Where's the Money, Lebowski. All submissions will be reviewed within 24 hours.