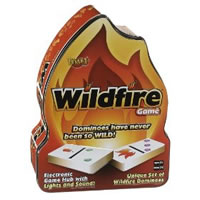 How To Play Wildfire (Instructions)

Wildfire dominoes is a game that can be shortened or lengthened depending on just how long you want to play. Wildfire domino rules and instructions are similar to the original dominoes but you'll still have to be sure and glance over them. Play Wildfire Dominoes today!

The game Wildfire should come with the following components. These are based off of the original game and don't include components from any expansion packs or different editions.

To win Wildfire, each round you must be able to play all dominoes in your possession and have less points than your opponents at game's end.

Please keep in mind that the official Wildfire rules and instructions could be different depending on the game version you have. The rules below are some of the exact directions that came in the original packaging and will teach you how to play Wildfire. Download these original PDF game rules or print them for later use.

Share with us your comments, funny stories, tips, advice, strategies, creative ways to play, questions about how to play, problems with the directions or anything you want about Wildfire. All submissions will be reviewed within 24 hours.

Amy says:
I am missing one domino piece out of the Wildfire dominos game. How do I find out which one it is?
Me says:
Bought this at a garage sale. It is missing some dominoes. Can it be played with other dominoes or can another set of dominoes for the game be ordered?
Ashley says:
This is the coolest game EVA
Rose says:
My family and friends LOVE this game. It provides hours of fun and loads of laughs
©2022 Board Game Capital - About Us