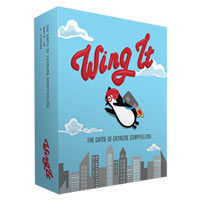 How To Play Wing It (Instructions)

Presenting the storytelling and problem-solving game called Wing It. During each round, players are all tasked with coming up with their own solutions to a common story read out loud by using three of the object cards in their hands. If you can become the most creative and favorite Wing It solution three times then you'll win.

With a large stack of object cards and numerous carefully written situations, Wing It players will get their brains going as they try to outwit their opponents in trying to come up with the most clever uses of the random objects in their hands. Will you have what it takes to wing it? Give this game a try today!

Board Game Capital's Review:
(2017-08-23)
I think by now everyone has had the chance to play some version of the many games similar to Apples to Apples. I don't know who was first to come out with the "become the favorite answer" idea but Wing It plays off of the common rules of having a judge, a problem or situation card and players trying to gain favor by using the most outrageous, witty or practical card in their hand.

What sets Wing It slightly apart from its competitors is that the situations are the beginnings of well thought out stories. They set the stage for how you need to use three of your random object cards in your hand. After opening the box we realized there would be no shortage of object cards (there are a lot!) nor the amount of creative links you could create to wing it and complete the story. 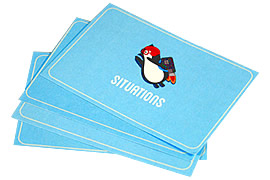 We did notice, however, there was a drastic difference in amount of situation cards. Keep in mind that we received a very preliminary beta version of this game so perhaps more is yet to come. While the stories may become repeats in subsequent games, the solutions or objects used will always be different, especially since the acting judge decides whose response wins.

While playing, everyone was on the edge of their seat intently listening to each situation. We were greatly impressed by the random, diverse and creative way that they were written. Then, everyone went into "wing it" mode mentally connecting their objects. Lastly, the relaxing phase came as everyone shared their solutions and of course laughter ensued the preposterous ideas that people came up with.

If you're looking for a relaxing, mentally/socially stimulating, thought provoking and imaginative game then Wing It will be a perfect fit. Can you make your case to how you'll use an ice cream scoop, a paper shredder and a bicycle helmet to aid you in the following: "You work at a furniture delivery company. On the highway, a sudden drop in traffic speed forces you to slam on the brakes...leading three couches to bounce out of the back of your pickup truck and into two of the three lanes. Three couches are now obstructing the road and dozens of cars are coming on fast."

The game Wing It should come with the following components. These are based off of the original game and don't include components from any expansion packs or different editions.

Collect 3 Situation cards and you'll become the Wing It winner.

Please keep in mind that the official Wing It rules and instructions could be different depending on the game version you have. The rules below are some of the exact directions that came in the original packaging and will teach you how to play Wing It. Download these original PDF game rules or print them for later use.

Share with us your comments, funny stories, tips, advice, strategies, creative ways to play, questions about how to play, problems with the directions or anything you want about Wing It. All submissions will be reviewed within 24 hours.

Danny says:
Sounds like a fun game. I bet my creative and talkative kids would like this.
©2023 Board Game Capital - About Us