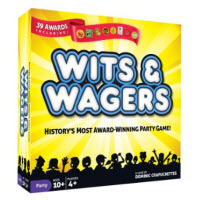 How To Play Wits & Wagers (Instructions)

Wits and Wagers is a great game for those that like trivia games but can't quite remember all the facts...in which case you'll just have to guess. Questions like "how tall is the Oscar statuette" and others that will get your friends and family talking, debating and guessing. Even if you have no idea, you just might be the closest answer which really levels the playing field.

This party game is fun to learn how to play and you should be off and playing in no time. Due to the guessing trivia of this game, even younger kids can play which can put a funny spin on things. Even if you know you are wrong, you can bet on someone else and still win. Wits and Wagers is an easy going game where everyone isn't tensed up trying to outwit the next player. Play this game today!

The game Wits & Wagers should come with the following components. These are based off of the original game and don't include components from any expansion packs or different editions.

Be the player with the most amount of points after 7 questions have been played.

Please keep in mind that the official Wits & Wagers rules and instructions could be different depending on the game version you have. The rules below are some of the exact directions that came in the original packaging and will teach you how to play Wits & Wagers. Download these original PDF game rules or print them for later use.

Share with us your comments, funny stories, tips, advice, strategies, creative ways to play, questions about how to play, problems with the directions or anything you want about Wits & Wagers. All submissions will be reviewed within 24 hours.

James says:
What the consensus on whether you have to display your chips to other players during the game so they know how much you have? Wouldn't it make sense, similar to poker, that other players have the right to know how much money (points) you have accumulated so they alter their own bets? I did not see anything in the official rules about this.
Alan says:
I don't understand the Elvis card. Most guesses in the example were over $100. Yet two chips were placed on the Elvis card which the answer is assumed to be less then one .
Mase says:
I would like to know how much chips do you begin with in the deluxe version?
Ben says:
Is there any reason why you couldn't play this as teams? I have more than 7 people that will be playing and don't see anything in the rules that would prevent me from splitting us up in team. Just curious if someone else has done this before.
Hank says:
Thanks for the quick link to the game rules. We needed to read through the instructions to clarify a question but can't seem to find ours.
Trent says:
This game is a perfect fit for me. I hate trivia games because I don't know a lot of random facts. But this game you just need to make a logical guess and then there is an aspect of betting on who you think has the right answer. It has just enough of a spin that it is really fun and can involve just about anyone.
©2022 Board Game Capital - About Us