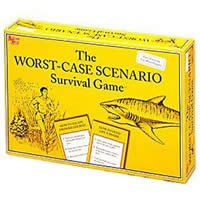 The game Worst Case Scenario is based on the best-selling book series Worst Case Scenario. You never thought all those bad life experiences and grumpy days could make you win a game? Test your decision making skills as players attempt to pick the best situation to common life scenarios.

You'll be answering questions like What's the best way to cross a piranha-infested river? and What's the best way to scratch an itch in a cast? Worst Case Scenario will have you and your team coming up with hilarious answers and using your survival skills. Check out Worst Case Scenario for a unique experience and a chance to learn a lot about things you probably have never thought about before.

The game Worst Case Scenario should come with the following components. These are based off of the original game and don't include components from any expansion packs or different editions.

Your goal in the game of Worst Case Scenario is to be the first team to reach the Finish space.

Please keep in mind that the official Worst Case Scenario rules and instructions could be different depending on the game version you have. The rules below are some of the exact directions that came in the original packaging and will teach you how to play Worst Case Scenario. Download these original PDF game rules or print them for later use.

Share with us your comments, funny stories, tips, advice, strategies, creative ways to play, questions about how to play, problems with the directions or anything you want about Worst Case Scenario. All submissions will be reviewed within 24 hours.

Dominic says:
These cards have the funniest answers ever.
Mary says:
I'm looking for instructions to "Worst Game Scenario game of surviving life. Anything I can print out? Got the game at 2nd hand store with no rules. Thanks
Debbie and daph says:
Wel... I took a box of cards to my friend thinking this was the complete game as I got from a charity stall..never laughed so much .when we realised we has no board .no instructions and a bundle of hilarious situations ...so so funny
©2022 Board Game Capital - About Us