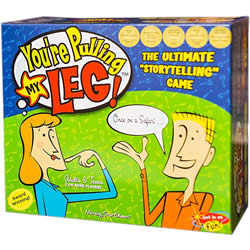 You're Pulling My Leg Game Rules

How To Play You're Pulling My Leg (Instructions)

Get the ice broken and the conversation rolling with this fun story telling game. You're Pulling My Leg is a game of true stories and some that are way far from the truth. Players try to fool others into thinking they are telling a lie. If they succeed, they'll gain points which will push them closer to victory. You'll gain points for correctly guessing the validity of the stories told or for fooling others.

You're Pulling My Leg is a game that can be played anywhere with anyone. You'll learn more than you ever thought possible about the other players in a very short time. Different versions of the game are out there that are specific to children (Junior) or are in book format to make it more portable to be able to be played virtually through video call. See how good you are at pulling legs and have fun playing You're Pulling My Leg today. 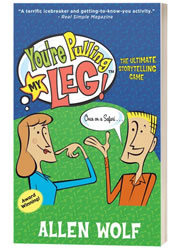 First thing we feel we need to mention is this is not a game in the sense that it has physically separate cards, game pieces or any other gaming components. This is a book - a book that is formatted so you can have a simple conversational activity. There are many books that fit into this category where you can make a game out of it (I spy books, activity books, who can find the longest word on a random dictionary page, etc.). We share this book/game since it was the creator's intent to make a game that can be played during a time when people are discouraged to get together physically to play a game (social distancing) and verbal communication has been minimized. It's a game that can be played through video chat or a phone call. That said, here are a few thoughts about this "game."

You're Pulling My Leg is like other games out there where players try to say something in hopes of tricking others into thinking it's false. There are hundreds of thought provoking topics that can spawn some distant memories. Some topics we drew a blank and had nothing to talk about so that was a great opportunity to pull someone's leg and make one up. It's nice that there are at least two topics to choose from on each "card" in the book.

The book is professionally printed and is a soft cover print. There are some interesting features to this book. A couple variations of the game rules can be found in the front. There is space on every page for you to write your favorite stories that are told during the game. At the end of the book, there are even a few blank pages for score keeping. We've never seen a book so formatted for a game before but then again we normally don't review books. It's a book meant to be written in. 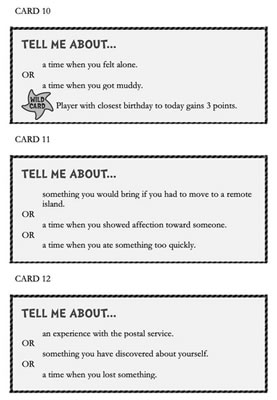 To be honest, the blank sheet on every page for recording funny stories felt like a page of good intentions but one that we'd never use. We didn't have time to write anything down and that would drag the game on too much. Perhaps it's just a quick one sentence reminder? Some might use this more than others.

Interesting stories will be told and you'll learn a lot about other people. It's fun, it passes the time and it tests some with how good they are at making up a story and keeping a straight face (if played visually). One designated score keeper helps when played over video chat. It definitely gives you something to talk about which can be hard at times when you're just staring at each other. For that, we give this game book a thumbs up. A game book is an interesting idea. If you're looking for something original with new twists and gaming mechanics, or something strategic or anything similar to a "normal game", this is not the game you seek. You're Pulling My Leg is a conversational book that can be fun to pull out from time to time to spawn memories and pass those on to those you play with. Or, you could always just pull their leg!

The game You're Pulling My Leg should come with the following components. These are based off of the original game and don't include components from any expansion packs or different editions.

Be the first player to 21 points by correctly guessing truths and telling lies that others fall for.

Please keep in mind that the official You're Pulling My Leg rules and instructions could be different depending on the game version you have. The rules below are some of the exact directions that came in the original packaging and will teach you how to play You're Pulling My Leg. Download these original PDF game rules or print them for later use.

Share with us your comments, funny stories, tips, advice, strategies, creative ways to play, questions about how to play, problems with the directions or anything you want about You're Pulling My Leg. All submissions will be reviewed within 24 hours.