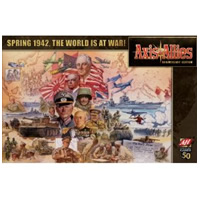 How To Play Axis & Allies (Instructions)

Axis and Allies is a classic WWII board game similar to that of the Risk board game. A full map of the world is provided with various territories broken up. Players have at their disposal infantry, armor, fighters, bombers, battleships, aircraft carriers, submarines, troop transports, anti-air guns, and factories all with different functions and purposes.

Players have to work together (if playing in teams) to coordinate offensive and defensive war tactics. If you like war games, Axis and Allies is a must play. Try playing the board game Axis and Allies today.

Axis and Allies can be played by up to five players. Each of you will control one or more world powers. On your turn, you build, deploy, maneuver, and command army divisions, air wings, and naval fleets to loosen your foes' hold on their territories. On your opponents' turns, they will bring their forces against you. The more territories you hold, the more weapons you can build—and the more powerful those weapons can be. When at the end of a turn, your side controls a set number of victory cities, you win the war.

Please keep in mind that the official Axis & Allies rules and instructions could be different depending on the game version you have. The rules below are some of the exact directions that came in the original packaging.

Share with us your comments, funny stories, tips, advice, strategies, creative ways to play, questions about how to play, problems with the directions or anything you want about Axis & Allies. All submissions will be reviewed within 24 hours.


Ben says:
Wow, these game rules are a brain full. I saw this game and it looked really fun but after looking through the game rules I am so overwhelmed and confused I give up. Maybe this is just isn't my kind of game but I sure couldn't learn how to play.
Scott says:
I remember a classmate in school being obsessed about this game but never really attempted to learn how to play since the rules looked a little intimidating. Maybe I'll have to look into now that I have more time.
Justin says:
why does Italy only get 10 IPCs per turn they should get a least 17 IPCs.
kurt logan says:
Can the british invade germany in an anphibious assault through the denmark stright.
Huge List Of
Free Board Game
Giveaways!