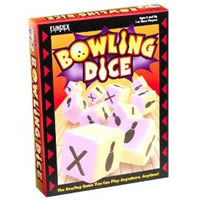 How To Play Bowling Dice (Instructions)

If you like to go bowling for your past time, Bowling Dice is a great game to play while you are at home or anywhere you go. The Bowling Dice game is an extremely portable game that only includes 10 dices and a score pad.

Bowling Dice does not however include that much skill unlike the real sport. Your luck is in the hands of the dice. Bowling Dice is still a fun game to play to pass the time by yourself of with others. See how many strikes you can get with this fun dice game. Try playing the Bowling Dice game today!

The game Bowling Dice should come with the following components. These are based off of the original game and don't include components from any expansion packs or different editions.

Be the player with the highest score after playing 10 frames.

Please keep in mind that the official Bowling Dice rules and instructions could be different depending on the game version you have. The rules below are some of the exact directions that came in the original packaging and will teach you how to play Bowling Dice. Download these original PDF game rules or print them for later use.

Share with us your comments, funny stories, tips, advice, strategies, creative ways to play, questions about how to play, problems with the directions or anything you want about Bowling Dice. All submissions will be reviewed within 24 hours.

Jody says:
What happens when you get all blacks on 1 roll how do you score it
Laura says:
How about telling us how to play it in ENGLISH!!!!!. Bought at Walmart in South Carolina. French instructions.
Robin says:
All my dice have 3 pins and 3 blanks on each
Phillip says:
instructions in french and only 8 dice. fire the quality control personnel.
AidanPryde says:
My set came with 11 dice. The breakdown is 4 strike dice, 3 spare dice and 4 pin dice. I'm guessing the extra die is one of the strike dice, because it makes sense to me that their would be the same number of spare and strike dice (3 of each, rounded out with 4 pin dice).
Sybil says:
I only have instructions in French I'm glad you have them on here
Chris Hamm says:
I purchased my bowling game and have 11 dice. Can you tell the me how many "X" dice, how many "/" dice and how many "pin" dice there are in the game? The instructions do not include that information.
Jose says:
Missing one dice but not all are same what am I Missing?
Ruth Bonillas says:
This game was a gift for my grandson. It had no instructions for game, thank goodness for internet.
Mary says:
No English directions; only French! No internet! Glad I can look it up on my cellphone but I prefer paper directions that I can show everyone playing.
Lori says:
Our bowling dice game also came with 10 dice but no spares or strikes!!
Cdnelso says:
My game with 10 dice but none had strikes or spares??? How many are supposed to be marked?
Kim says:
Our bowling dice came without any strikes or spares on the die!!!!!!!!!!!!!!
Krista says:
We were given this game and the instructions on one side are in French,the other side the scoring in English. We also received an extra dice. Had to Google the full instructions in English.If you are going to be bilingual,try giving the FULL Rules of the Game in both languages.
Pat says:
No English instructions. Only French?????kinda sucked. Had to take time and look it up on the internet. What if I didn't have internet? Looks like by all the comments I am not the only one who had this experience. Sucks when your trying to teach kids and now have to look it up on the internet.
Michelle says:
I purchased Blowing Dice game at Wal-Mart in the U.S.A Instructions are in French. I need them in English.
Darrel says:
Bought the game this weekend. It has an extra dice. Needed to find out which dice is the extra one
Chad says:
Just bought game looked fun. But had to find instructions online because half of the instructions were in English and half were in french.
b says:
just bought the game thinking it might be a fun one. but the instructions are in spanish. bought in the u.s., im american and only speak english...come on Ideal...get with the program..!!
Ansley from SC says:
Our game also came with French instructions.
Larry says:
Amazing just bought Ideal Bowling Dice in Missouri and the instructions were in what appears to be French. So it's made by a company from Canton MI, made in China with French instructions. That is a sign of a poorly ran company if you ask me.. I wonder if the French have the English instructions?
Robert says:
My instructions were in french, what gives?
Lynda MO says:
Just bought it and it only has rules in Spanish only.... need to know how to play it.
Sue H says:
Rules in game box was in French!!!!! Thank goodness we were able to go on the internet to get the English version!
Ranae says:
Yay!! What everybody else said!! French?? Really
mad In Oklahoma says:
Mine was bought here In Oklahoma but the instructions was in Spanish how do you play it
Lisa says:
I really think if you buy in America you should have the instructions in English in the box and not have to get them from the internet.
bob says:
All the directions were in spanish how do you even play the game
cheri tomaino says:
had to google directions in English
SBarnett says:
The game I bought had instructions in French only! Seriously, at least have English instructions if sold in USA.
Melissa says:
Stupid the instructoins are in french .I speak English not french please tell me the instructions
kevin says:
I bought this game it said ten dice mine came with eleven ? what one do I remove
laurieshappy says:
I also purchased bowling dice at wal-mart in the USA and the instructions are in french?
Marcia says:
The directions are only in Spanish. I am an English only speaking person in the US. I would appreciate if you sell a game in America to at least have the directions in English.
Nicole Parks says:
Would have been nice for the directioins to have an English version considering I am in the U.S.A. Otherwise, good,fun family game.
Susan hoss says:
I bought the dice biwling game at wal mart and the instructions are only in Spanish need English I structions
martyshouk AT y says:
It's a cute, fun little game actually, but it's completely random, no skill involved. Plus a great way to practice scoring bowling games, if anyone does that by hand any more.
©2023 Board Game Capital - About Us