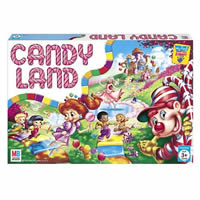 Candy Land is a game designed to help young children learn through recognition of colors. Play proceeds as the players draw colored cards, then move to the next square that shares that color. Players must face adventures such as the "peppermint forest" and "licorice squares."

This game is perfect for young children who want to play games but can't read. Candy Land is a colorful board with gingerbread man playing tokens that appeals to young children. Candy Land does not require any reading for play.

The game Candy Land should come with the following components. These are based off of the original game and don't include components from any expansion packs or different editions.

Be the first player to reach the Candy Castle by landing on the multi-colored rainbow space at the end of the path.

Perparation: Pick a character mover and place it on START.

Game Play: The youngest player goes first. Turns go to the left. Spin the spinner. Where did it stop?

Special Rules for Younger Players:
If the spinner lands on a picture space that’s behind you on the path, don’t move backward, and SPIN AGAIN!

Please keep in mind that the official Candy Land rules and instructions could be different depending on the game version you have. The rules below are some of the exact directions that came in the original packaging and will teach you how to play Candy Land. Download these original PDF game rules or print them for later use.

Share with us your comments, funny stories, tips, advice, strategies, creative ways to play, questions about how to play, problems with the directions or anything you want about Candy Land. All submissions will be reviewed within 24 hours.

Anne says:
If you get a double red card and you approach the rainbow trail can you cross over with the first red square and proceed to the next red space on the other side? Some players say you can't cross over and have to move just two red spaces.
matt says:
does the picture space have a color? they clearly have colors but the directions just differentiate between picture spaces and color spaces. when you get a color on the spinner are the picture spaces counted? they do have colors. im in a rage
Dude111 says:
They have totally destroyed this game..... The board looks aweful now.... It started being ruined in the 80s! Im glad I have th 1978 version! (LAst GOOD/original version)
JJ says:
So if you are stuck in a swamp "stay here until a blue card is drawn", i know you don't get to move forward until you get a blue card, but do you get forward or backward with a candy specific card like the lollipop card?
Monica Tracey says:
You can get any color to win the game but in the new game my daughter lost directions and I just want to know if the x means move back a color and the arrow means move up a color well the color that you have
Betty Cowart says:
We have the new game with the spinner. What does the square with the x mean and how does the game end? We have lost the instructions.
Lisa says:
Yes, if you get a single color in the rainbow, you win. Yes, the instructions didn't explain this correctly. I had to search a bunch of sights to find this out.
Crystal says:
If a space is occupied, can you jump to the next space of the same color? I lost the instruction sheet to my Candy Land Item A4813 and I forgot if you can do this in this version.
Ceaser says:
Ifnif you land on the x dosnt that mean you have to move one space back
Jack says:
When you both land on the last square which is the rainbow, how do you determine what color of spin allows you to enter the castle?
Christine says:
How does this game end??? This is not a good way of teaching our kids to win the right way. so where is the rule that tells you who won ??
Kaleigh says:
Does anyone have a new candy land with a spinner? What does it mean when it has an x on the color you land on
faith says:
i forget how to play and i want to know and i also queen frostine i i almost win at every game but i sometimes loose and that is not fair and i..... just want to say thanks for making candyland
Jamie says:
I like playing this with my kids and they love to make up their own rules every time we play. Their way of how to play Candyland even changes during the game but they still have fun.
rainbow says:
im makin ah qame called jollyland and need advice
Riana says:
I agree with Phyllis on 11/15/2009 exactly how do you get to the multi-colored rainbow square? I'm guessing any color card with one square/move will win the game.
hi says:
I love this game even tho I'm a youth. P.S. Some people say my name isn't possible, but my dad, granddad, great-granddad, and great-great-granddad were all named hi
Kacie Ann Carde says:
i love this game i have always played it when i was lil
david says:
I agree with Phyllis. Something is missing in the 2004 instructions. There's no way to end the game.
Phyllis says:
It says in the 2004 rules that the first person to reach the multi-colored rainbow space wins. How do you get to the multi-colored rainbow space; is there supposed to be a card for this or is it just any card that will win the game?
©2023 Board Game Capital - About Us