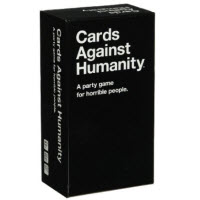 How To Play Cards Against Humanity (Instructions)

Unlike any other game out there, full instructions are out there to make this game your self using the manufacturers pattern and rules sheet. You can make it for free or purchase your own professionally made one. That aside, Cards Against Humanity is a funny game where you try to win over the heart of the player that chooses the best answer - be that funny, original or dumb.

The game Cards Against Humanity should come with the following components. These are based off of the original game and don't include components from any expansion packs or different editions.

Please keep in mind that the official Cards Against Humanity rules and instructions could be different depending on the game version you have. The rules below are some of the exact directions that came in the original packaging and will teach you how to play Cards Against Humanity. Download these original PDF game rules or print them for later use.

Share with us your comments, funny stories, tips, advice, strategies, creative ways to play, questions about how to play, problems with the directions or anything you want about Cards Against Humanity. All submissions will be reviewed within 24 hours.

Jay Emberson says:
Some questions answered: The expansion packs allow you to, as the name implies, expand your gameplay. Many expansions are themed, allowing for you to add things you like. 90's, Nerd Culture, etc... The rules are simole. The only variation really is the inclusion of a fake person (Lando Cardrission) who will always answer with the top card of the deck.
Taylor says:
Cards against humanity is basically like apples to apples or other games where you are trying to say or write the funniest thing. If you do then you'll get a point. Very laid back game and not one of my favorites. Rules are very simple but so is game play - boring.
Seth says:
Are the expansion packs or red and green boxes worth it? I don't even understand what they are.
Raylyn says:
I am so confused. These rules don't really tell you how to play. I was expecting something similar to what you'd find in the box. Are these really what is in the box? It looks like there are different ways to plat as well. For so many reviews I'm kind of lost what do to.
Bryan says:
I saw this on amazon and noticed it had over 36,000 reviews and a 5 start rating. What is so special about this game? I wanted to read through the game rules to see what it was about. Sounds interesting. I just purchased it so we'll see how it goes on our next game night.
Hadley says:
Thanks for the game rules. I must have left them at a friend's house or something cause I can't find mine. We had a few questions about how to play last time so it's good to have the rules handy.
©2022 Board Game Capital - About Us