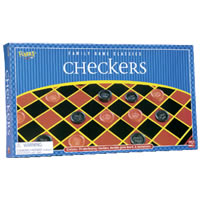 How To Play Checkers (Instructions)

Checkers is a classic board game that has been around for centuries. Besides the name of Checkers, it is also know as Draughts, Dama (Spain and Italy), Le Jeu de Dames (France), Warcaby (Poland) and das Damenspiel (Germany) to name a few. This ancient Egyptian game has been played in just about every country of the world have has been found in archeological digs dating back as far as 600 BC.

Checkers is a fun two player board game that involves strategy to outsmart your opponent. Each player is in control of one color of pieces

that can jump the other color in adjacent squares. The checkers board is made up of 64 alternately colored squares (usually black and red). Checkers boards have been made is all shapes and sizes including small travel boards to life size boards spanning 10-12 feet.

Checkers is a board game that even kids enjoy playing. For more information on the exact checkers rules please read below.

The player that cannot move and is blocked by the other player or cannot move from loosing all their pieces loses the board game checkers.

Perparation: The checkers board is unfolded or laid out and the 12 pieces are positioned on the darkest squares starting with the squares closest to the edge on each side. There should be two rows of squares in the middle with no Checker pieces on them. If checker pieces are such that on one side there is a crown, those should be faced down until further in the game.

Game Play: If playing with black Checkers, the rules and instructions suggest that red moves first and colors are alternated in subsequent games. Also, each player has 5 minutes to complete his turn before loosing it.

Rules on moving normal checkers pieces are they can move one square forward in a diagonal direction landing on the same color as all other pieces. A piece that has been Kinged can move one square diagonally in both directions (forward or backwards). All pieces can only be moved onto vacant squares unless they are jumping the opponent.

You can reduce the number of pieces the other player has by jumping over their piece if they are located on the adjacent square with a vacant square following them for your piece to land. Multiple jumping is not against the rules as far as the Checker piece is advanced in a forward direction. If piece being played is a King, player can move jumping in both directions in the same manner. Each jump or sequence of jumps consists of one turn. If a player can jump another player, you must jump and remove their piece. The Checker instructions state that multiple jumps must be completed and not stopped half way through. If you have a choice of jumps, you can choose among them regardless of whether some of them are multiple jumps or not. Jumping your own pieces is against the rules. Any piece, whether it is a king or not, is allowed to jump a king.

Pieces can be Kinged by reaching the last row of the opposite side referred to in the rules as the King Row. To "King" a piece, another Checker is placed on top of the exiting piece or the Checker is turned over to reveal the crown (depending of game pieces). The Kinged piece then follows the normal turn pattern.

Please keep in mind that the official Checkers rules and instructions could be different depending on the game version you have. The rules below are some of the exact directions that came in the original packaging. Download these original PDF rules or print them for later use.

Share with us your comments, funny stories, tips, advice, strategies, creative ways to play, questions about how to play, problems with the directions or anything you want about Checkers. All submissions will be reviewed within 24 hours.


shelley says:
what happens if both are blocked and cant move, no kings yet?
Micky says:
thanks........helped alot (note sarcasm)
chloe says:
can you pass in checkers?????
Kia says:
I am doing a research on checkers
Bob says:
I love checkers
Grace says:
How can a player move his checker one square and then jump a checker in the same move????
bubbalious says:
this game might be old but i still play it cause it cool
Aaron says:
Checkers is one of my fav games!
Amanda says:
My bro and i play this all the time!
Bob says:
I HATE CHECKERS!!!
Huge List Of
Free Board Game
Giveaways!