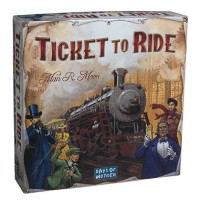 How To Play Ticket to Ride (Instructions) 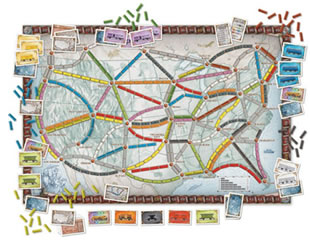 Ticket to Ride is a very popular board game which involves up to five different train companies trying to get to different destinations all fighting over the same track lines. The more destinations you are able to complete the more points you get but make sure no one else blocks your path. Can you get the longest track? Can you score extra points by completing longer four train routes? Can you complete all your destination cards before the game ends and they count negatively toward your score. There is a lot to think about - which makes this game a favorite for so many people. Just when you think you have the game beat someone comes out of no where and beats you in points. 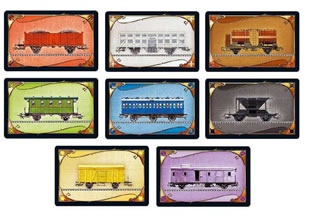 Ticket to Ride is a board game based on both strategy and luck of the draw as your moves depends on the color train cards you pull from the deck/pile. With so many options and decisions, this game begs you to play and try again. The rules are still fairly simple and easy to understand so almost anyone can play that's eight years old and up. There are also tons of variants on the game so you can play in the area that you live. Great game for small groups up to five players and won't take the whole afternoon to play. Play a game of Ticket to Ride today and you'll love it for years to come!

The game Ticket to Ride should come with the following components. These are based off of the original game and don't include components from any expansion packs or different editions.

Everyone is competing to win the highest points that can be earned by placing long trains, completing ticket routes, having the longest train and various other ways. Whoever has the highest number or points at the end of the game or whoever reaches the last point spot on the board wins.

Please keep in mind that the official Ticket to Ride rules and instructions could be different depending on the game version you have. The rules below are some of the exact directions that came in the original packaging and will teach you how to play Ticket to Ride. Download these original PDF game rules or print them for later use.

Share with us your comments, funny stories, tips, advice, strategies, creative ways to play, questions about how to play, problems with the directions or anything you want about Ticket to Ride. All submissions will be reviewed within 24 hours.

Twiggy says:
Do you count the routes that you have taken by placing a station on your score
Jack says:
@Twila - Yes you can. That's one of the main points of the game to take advantage of routes you have already completed.
Carter says:
For Ticket to Ride United Kingdom. May you buy a technology card and draw/lay cards on the same turn.
Andrew says:
Do you have to have a destination card in your hand at all times in ticket to ride?
Shauna says:
Wow, now that is a list of rules! I had no clue there were so many versions. Are the rules basically the same for all versions just different maps?
Canyon says:
I recently got Ticket to Ride on my phone and like how automated it is. I have don't have to do any of the math but have to admit that playing the board game in person is still more fun to play. The rules are the same in both versions although it's probably easier to learn how to play on your phone since they walk you through it and don't let you do things you're not suppose to.
Angelique says:
Towards the end of the game I played six trains and had only 1 train left which means each player has only one turn left. I took this to mean that we all had one more turn including myself. Everyone played their last turn. On my final turn, I had only one plastic train left but I had enough cards to claim a 3 car route. Could I still claim that route on my last turn even though I only had one plastic train?
Carol says:
Near the end of the game I had 3 trains left. Must I draw another route card or may I just draw train cards for my next turn?
Joy says:
Each turn, you have a choice to take tickets, pick up cards, or place trains on the board. Late in the game, it's probably a better idea to try get 4 to 6 cards of the same color to earn extra points.
Joy says:
To get started just give everyone four train cards and three tickets. Each player must keep at least three tickets. use the colored train cards to "buy" the track between two cities. If you play the game differently than the rules, just relax. Most people play games incorrectly without ever knowing that the real rule. I've played the expansion incorrectly for two years before I found out I was only supposed to have one bonus. I still play with both bonuses.
Jenn says:
Once you complete 3 destination ticket card routes, do you have to draw more destination cards?
Mike says:
Can't even figure out how to get started. Ready to return game...or throw it out the window.
Ada Waller says:
I bought this board game for my 10 yr old granddaughter, but cant figure out how to play
Maggie says:
The first time I played this I was just collecting cards and randomly placing trains. I didn't quite get it. But after one complete game it clicked and I'm hooked. There can be so much strategy and I absolutely love this game. Definitely one of those games where the rules confuse you but playing makes it easier to learn.
©2022 Board Game Capital - About Us