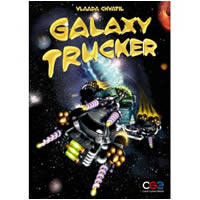 How To Play Galaxy Trucker (Instructions)

The game of Galaxy Trucker is all about building sewer systems and low-income housing on the less-developed planets of the Galaxy. But, just when this company thought they were going to go out of business due to the risks, a couple visionary people decided that in order to ship materials, they should ship it in the form of a space ship.

Sign the contract and you'll be playing the game of Galaxy Trucker where you get unrestricted access. Build a space ship, then fly it to the outer edges of the galaxy. If everything goes well you might just find yourself to be a rich person, if not? Well enjoy sleeping on the street. Check out Galaxy Trucker for a fun and unique game that will have you traveling all over the galaxy.

The game Galaxy Trucker should come with the following components. These are based off of the original game and don't include components from any expansion packs or different editions.

Your object is the game of Galaxy Trucker is to have the most cosmic credits at the end of Round 3.

Please keep in mind that the official Galaxy Trucker rules and instructions could be different depending on the game version you have. The rules below are some of the exact directions that came in the original packaging and will teach you how to play Galaxy Trucker. Download these original PDF game rules or print them for later use.

Share with us your comments, funny stories, tips, advice, strategies, creative ways to play, questions about how to play, problems with the directions or anything you want about Galaxy Trucker. All submissions will be reviewed within 24 hours.

Peerless says:
Okay I'm cnoviencd. Let's put it to action.
©2023 Board Game Capital - About Us