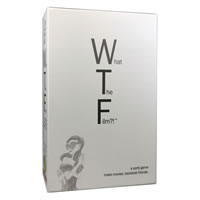 What The Film?! Game Rules

How To Play What The Film?! (Instructions)

We all have plenty to say after we watch a movie. The good, the bad, the "they should have done this or that." Well, now you can pitch your own films in the goofy game called What The Film. Players will get random actors, plots and sets and are only given 36 seconds (timer not included) to pitch their film to everyone. Watch out for the industry cards that will throw a wrench in your film.

What The Film is a fun game where players will get creative and crazy trying to make interesting films. If you have the best film, you'll get the points as other players vote on who they thought was the best. This is a great game to bring to a party and can be a lot of fun. Grab your copy of What The Film today. 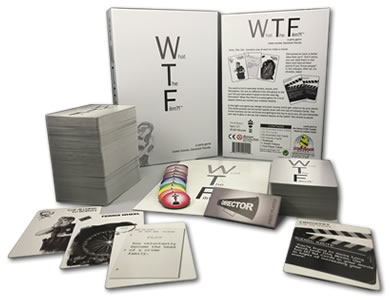 There are a lot of voting games out there where players pick a funny answer in hopes that they win the vote from the judge to gain a point. While they are fun and easy to learn how to play, they all kind of feel the same. What The Film falls into this same category but tries really hard to separate itself from all the others with a few unique features.

The first thing we liked that separated WTF from other Apples to Apples type games is all players get to vote on their favorite script (excluding their own). This creates some fun rivalries and competition from other players. The second thing, and perhaps the biggest advantage to WTF, is the use of the Industry Cards. There are 100 different scenarios to spice up the game and get you thinking on your toes. This adds to some strategy and some additional excitement. The third element was that you have a restricted time limit for your story. The fourth and last twist to the game are the added bonus points you'll get the more cards you successfully pitch in your film. 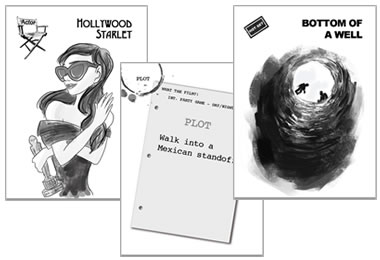 We also really liked how diverse and almost limitless the possibilities are in the films you can create. There are 300 cards to choose from (not including the Industry Cards) and you hardly ever see the same thing again after playing multiple times. The illustrations on the cards were fun to look at although the whole game is in black and white. While this follows the rough draft feel of the movie script creating theme, it did make things a little plain and boring. We also didn't quite understand why there were 11 award tokens yet only up to eight players are allowed. We played with four people and are a little worried that eight players might take a long time to get through everyone multiple times. There is a lot of waiting and listening in the game.

Like other games of this kind, the fun you'll have is primarily driven by the kind of people you are with and the mood that everyone is in. After playing your first round, people will become more comfortable and the laughter will begin. This isn't a riveting, fast paced game but rather a casual creative thinking game that can get a little goofy. Overall, What The Film is a good game to try with the right crowd and is a fun party game to play to learn a little more about those around you.

After six rounds, whoever has the most points wins.

Please keep in mind that the official What The Film?! rules and instructions could be different depending on the game version you have. The rules below are some of the exact directions that came in the original packaging.

Share with us your comments, funny stories, tips, advice, strategies, creative ways to play, questions about how to play, problems with the directions or anything you want about What The Film?!. All submissions will be reviewed within 24 hours.