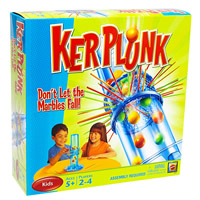 How To Play Kerplunk (Instructions)

Kerplunk gets its name from the sound of marbles falling - something you don't want to happen in this game. Players insert all the colorful sticks into the game tube and then place all the marbles on top of them. One by one every player gets a turn to remove a stick hoping that all the marbles stay on the top. Every marble that falls through on your turn is counted against you. Whoever has the least amount of marbles at the end of the game is the winner.

This fun party game is great for the kids as well as adults in any party. Little is needed to learn how to play and is mostly a casual luck game. Give Kerplunk a try - you'll have lot of fun playing it.

The game Kerplunk should come with the following components. These are based off of the original game and don't include components from any expansion packs or different editions.

If you can end the game with the fewest amount of marbles in your tray after all the sticks are removed then you are the champion.

Please keep in mind that the official Kerplunk rules and instructions could be different depending on the game version you have. The rules below are some of the exact directions that came in the original packaging and will teach you how to play Kerplunk. Download these original PDF game rules or print them for later use.

Share with us your comments, funny stories, tips, advice, strategies, creative ways to play, questions about how to play, problems with the directions or anything you want about Kerplunk. All submissions will be reviewed within 24 hours.

Ryan thornley says:
If you touch a stick can pull another one
Graham Hill says:
Greatest game ever
Breanna says:
I have played this game so many times with my kids - they love it. Only down side is I swear I spend more time setting it up each time than it does to play it. They like ripping them out and get really excited.
©2022 Board Game Capital - About Us