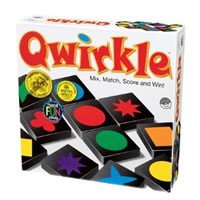 How To Play Qwirkle (Instructions)

The game of Qwirkle combines logic, strategy, and creativity. Create columns and rows of matching and colors and shapes to score points. Try to place tiles that match multiple pieces by shape and color to earn more points.

The player with the most points wins. Qwirkle is easy to learn and great for families of various ages. With a different game setup every time, you'll be faced with new challenges every game. Check out the game rules and instructions to get started. Play Qwirkle today!

Become the Qwirkle master by adding blocks to the grid to score the most points.

Please keep in mind that the official Qwirkle rules and instructions could be different depending on the game version you have. The rules below are some of the exact directions that came in the original packaging.

Share with us your comments, funny stories, tips, advice, strategies, creative ways to play, questions about how to play, problems with the directions or anything you want about Qwirkle. All submissions will be reviewed within 24 hours.


Mark says:
Question: given that in Quirkle we're trying to build this 6x6 grid, how do you add to it properly? I mean, we have incomplete rows & columns but how are we to properly expand that 6x6 block?
David says:
Does anyone also play this variation of "Quirkle": A line of tiles with different colours AND different shapes ( a type of rule taken from "Set"?
Anna says:
We changed the rules to play this way: The one who plays all tiles first does not get to add 6 pts; however a game is over and other players need to deduct their leftover tiles. We also play w 10-12-15 tiles to start. Makes game go faster.
Aggie says:
Bev, I ran into the same problem today. Did you ever get an "official" answer, other than Bernie's "I would assume . . . "? (My daughter and I have played 528 games in the past five years and this is the first time we have encountered this funny situation.)
Andrew says:
I wouldn't classify this as a children's game. The game rules are easy to learn how to play although the scoring can be a bit tricky adding up everything. There are so many possibilities. Qwirkle is one of my favorite games to play.
Shawn says:
Just played this game for the first time last weekend. Very easy to learn how to play and was able to involve everyone. I'll have to pick this up at the store next time I'm there. Would recommend Qwirkle.
Michael says:
@Miggie as long as your tiles are part of the same group (same shape/dif color vice versa) you can. @Bev if you can't play a tile you have to pass. Regardless of when it happens. Though some people have a mulligan rule at the start of the game (if all your tiles are different shapes AND different colors you redraw). Also, keep in mind that you can change the rules to make it more interesting, challenging or faster. Personally I prefer starting with 7 tiles versus 6 and it makes a huge difference.
Miggie says:
if a title is on the board is open, can I add to doth ends ?
Bernie says:
I would assume that when all of the tiles are used up and someone can't play, that he/she passes and play goes on to the next person. This would continue untill all of the tiles are uded up.
Bev says:
At the end of the game when the tiles are all used up, what happens when the one player has one tile left, but cannot play it anywhere on the board? The other player had one tile left and was able to play it. Does the game end with player 1 who could not exchange the tile (tiles all used up) or play it on the board or does player 2 get an opportunity to play his last tile and player 1's turn would just be skipped?
Huge List Of
Free Board Game
Giveaways!