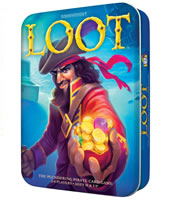 How To Play Loot (Instructions)

Loot is a fun pirate game where players attempt to capture the most lucrative merchant ships will competing with your fellow pirates. Who will trump who or which ships will simply be forgotten about?

Loot has some major strategy to it and is definitely not as easy as it may seem. The card game Loot is easy to play and learn how to play, but to become the Loot champion it will take some practice. Loot puts a twist on a what you would assume a typical card game would be. Try playing Loot today!

The object of the game Loot is to be the pirate with the most loot (gold coins) when the deck is depleted and one player is out of cards.

Please keep in mind that the official Loot rules and instructions could be different depending on the game version you have. The rules below are some of the exact directions that came in the original packaging.

Share with us your comments, funny stories, tips, advice, strategies, creative ways to play, questions about how to play, problems with the directions or anything you want about Loot. All submissions will be reviewed within 24 hours.


Kate says:
All fun I love it 💘
Sarah says:
I am hooked on this game. The rules are easy once you figure it out. The tricky part is learning the correct strategy. Every game is different. It's pretty quick to play also.
Randy says:
Does anyone know of different versions of rules that you can play. Some games have a couple ways to play. Didn't know if this was one. I didn't see anything in the rules but wanted to see if anyone else plays different. I'd love to learn how to play.
Kyle says:
Played this at a party and was a little lost the first time around. They quickly explained the game rules and said it would make more sense after we played one round. Boy were they right. Much easier to learn how to play by watching it be played.
Huge List Of
Free Board Game
Giveaways!