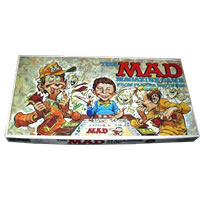 How To Play Mad Magazine (Instructions)

Ever played a game where you tried to loose all your money? Mad Magazine is the board game with just that as the objective and is a blast to play. Other crazy rules keep Mad Magazine fun and ridiculous as you act like a rock, take trips to anywhere you want and even roll the dice with your left hand. Don't forget to keep all the Mad Magazine game rules, the rules that you make up!

Mad Magazine is a hilarious board game that is totally off the wall and unlike any other you've played. It's a game where you actually try to do bad. Give Mad Magazine a shot and enjoy playing with friends and family for hours.

The game Mad Magazine should come with the following components. These are based off of the original game and don't include components from any expansion packs or different editions.

To be the first player to lose all your money!

Please keep in mind that the official Mad Magazine rules and instructions could be different depending on the game version you have. The rules below are some of the exact directions that came in the original packaging and will teach you how to play Mad Magazine. Download these original PDF game rules or print them for later use.

Share with us your comments, funny stories, tips, advice, strategies, creative ways to play, questions about how to play, problems with the directions or anything you want about Mad Magazine. All submissions will be reviewed within 24 hours.

Steffen says:
When an ability card is played, whose turn is it next, the player who played the card or the player who performed the ability?
Daniel says:
Part of the instructions are cut off at the bottom. Is there a way for you to fix that?
Brenda says:
This is the best game ever! Brings back great memories. Makes me miss being a kid!!
©2023 Board Game Capital - About Us