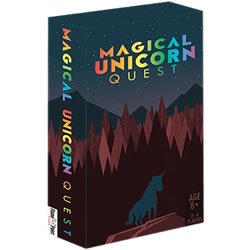 Get ready for a hunt in the Magical Forest as players attempt to find both the Golden Unicorn and the Majestic Unicorn. If they are successful in finding them and bringing them back to their stable then they will win the game. But look out, there are werewolves and ogres to hinder your path. Use dwarfs and elves to aid you on your journey and even preform a few mystical potions. The task isn't easy but you'll be sure to have fun on your way.

Magical Unicorn Quest is a fun and simple card game designed for up to six players that will need to be able to read the text on each card. Skill and luck are used with a nice balance in this game so each time you play there are new twists and turns around the corner. This fun magical and mystical card game will bring out the unicorn lover in everyone (or if you don't like unicorns it's still a fun game). Get your copy of Magical Unicorn Quest today. 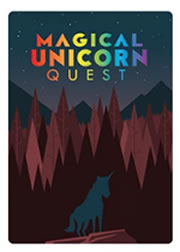 This is an interesting card game indeed. To be honest, we didn’t fully understand the rules after reading through the rule book. The rules seemed pretty easy and straight forward and we knew we were missing something so we decided to just play and see what happened. The first game was rocky as we stumbled through the rule book for answers. We felt the rule book was so simple it left a lot open to interpretation and confusion. Things like can you keep stacking Halts or Unicorn thieves? Why would you want to play those on your turn (one of the actions) unless it was in defense of someone else's attack? During the activation phase, if you play a new Mystical Being as a result of a Dwarf, does their power get activated too (we assumed not)? You get our point. Keep reading...

Once we kind of figured out the basics of the game, of how we thought we should play, the first couple games were over in about 5-10 minutes. We could see the potential for some interesting game plays but never had the chance to play them since the game ended so soon. We played a few more rounds where one game lasted longer but drastically had one player at a severe disadvantage of discarding cards. In a two player game, Ogres are directly aimed at the other player. We contributed it up to just bad luck.

We still had an urge to keep playing to see what came of subsequent games. We'd also love to try with a larger group and see how that plays out. There is a fair amount of strategy and luck of the draw. The mechanics of the game worked well (minus the confusion on some rules). We really felt like a definite order on the actions would have helped us not be as confused as to what we needed/could do next. Being able to play in any order makes us think there is a useful or strategic way to use this but we haven't figured it out yet. 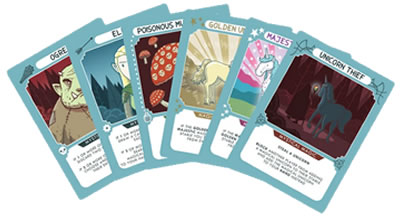 There was evidence that there was a lot of thought put into the game. The fact that you shuffle the cards after looking through them when you use an Elf makes it so you don't know where cards are AND mixes up all the unicorns from the bottom of the deck - smart. Also, there is a unicorn trader variant that we didn't play that lets you play in teams - sounds fun.

Game quality is great. The box is sturdy with a compartment for the cards. Cards feel good, rule book fits in the long box. Illustrations are nicely done. Some suggestions on the cards would be to color code or make the types of cards more obvious instead of just the little banner in the middle of the card. Also, we felt like the cards were really wordy. They got their point across and were helpful but we spent a lot of the game reading them over and over learning what they did. We suppose you'll memorize this eventually.

Our impression of the Magical Unicorn Quest was awesome at first when we saw great looking game box, then we were slightly confused after reading the rules, then we were really confused the first time through, then we caught on a little, then we played over and over and over and finally got the real fun of the game. It's a nice little card game with many twists and turns. Just when you think you got the game under wraps your plan gets flipped upside down. Long story short, we really liked it and we think you will too (you don't have to like unicorns). We just hope we are playing correctly.

The game Magical Unicorn Quest should come with the following components. These are based off of the original game and don't include components from any expansion packs or different editions.

If you can find and bring the Golden and Majestic Unicorn to your stable the game will end immediately and you'll be the winner.

Please keep in mind that the official Magical Unicorn Quest rules and instructions could be different depending on the game version you have. The rules below are some of the exact directions that came in the original packaging and will teach you how to play Magical Unicorn Quest. Download these original PDF game rules or print them for later use.

Share with us your comments, funny stories, tips, advice, strategies, creative ways to play, questions about how to play, problems with the directions or anything you want about Magical Unicorn Quest. All submissions will be reviewed within 24 hours.