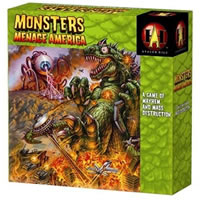 In the board game of Monsters Menace America you can do whatever you want. But you aren't the only giant monster around. While you are running around smashing and eating things, researching and mutating, planning nuclear strikes, other monsters are trying to do the same. It is a battle between you and all the other monsters.

The game Monsters Menace should come with the following components. These are based off of the original game and don't include components from any expansion packs or different editions.

You control one giant monster and one military branch. Strengthen your monster by mutating, increasing Health, and earning Infamy. Weaken the other monsters by attacking them with your military units and interfering with their vile plans. The game ends with the Monster Challenge, in which all the monsters battle to see who will become the King of the Giant Monsters and win the game.

Please keep in mind that the official Monsters Menace rules and instructions could be different depending on the game version you have. The rules below are some of the exact directions that came in the original packaging and will teach you how to play Monsters Menace. Download these original PDF game rules or print them for later use.

Share with us your comments, funny stories, tips, advice, strategies, creative ways to play, questions about how to play, problems with the directions or anything you want about Monsters Menace. All submissions will be reviewed within 24 hours.