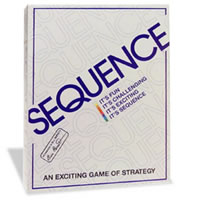 How To Play Sequence (Instructions)

Make sure you have a backup plan just in case your opponent tries to trip you up. Sequence is a great family game that is quick-moving and enjoyable for everyone. Be sure to check out Sequence for an easy-to-learn, fun game. Play Sequence today.

For 2 players or 2 teams: One player or team must score two Sequence before their opponents.

For 3 players or 3 teams: One player or team must score one Sequence before their opponents.

Please keep in mind that the official Sequence rules and instructions could be different depending on the game version you have. The rules below are some of the exact directions that came in the original packaging.

Share with us your comments, funny stories, tips, advice, strategies, creative ways to play, questions about how to play, problems with the directions or anything you want about Sequence. All submissions will be reviewed within 24 hours.