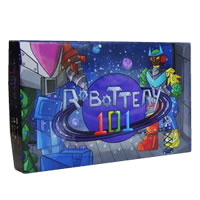 How To Play Robottery 101 (Instructions)

Join in the annual Robot Science Fair and see if you can build the best robot for the win. Robottery 101 is a building card game where you will literally build your robot with limb cards using colors and design as your guide. All robots will be judged by the anime professors so best of luck.

This colorful game looks very impressive on the table as everyone tries to build up the best robot. Great for kids eight years old and up, this card game is a keeper and a lot of fun for everyone. Quickly learn how to play Robottery 101 by reading through the game rules and instructions listed for free below. Be sure to add Robottery 101 to your game collection today! 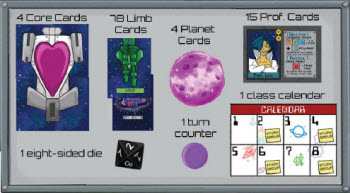 Space and robot enthusiasts be on alert - you have now been tasked to build a robot in your workshop! You'll be collecting robot parts from abandoned planets using alien technology. Straight out of the gate we had a lot of fun with this card game. It comes complete with robot piece cards as well as other items needed to complete the game (professor cards, a calendar, an indicator, a die and planet cards). When we first saw this game we didn't know it came with so many pieces and were impressed it fits in the little box it comes in. Everything looks great, matches, illustrations are awesome and pieces are built from good quality materials. No complaints about the pieces that make up this game or its packaging.

We enjoyed the theme throughout the game: space meets robots meets classroom workshop. We kind of felt like the triple theme was a little confusing at times and cluttered the game, but it works: you're in a classroom trying to build a robot with space parts all while trying to win the science fair judged by specific professors. 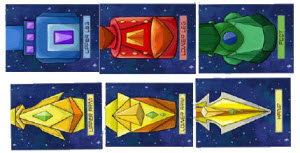 We were a little skeptical about how all the limbs and parts would fit together but they worked and looked great! Different designs and colors fit well with others. We also really liked that the part name (upper leg, lower leg, foot) was on the card to help decipher which part is which. We also liked the variety of the game cards - bodies were larger cards, limbs are miniature cards and the professor cards are average playing card size with the planet cards being circular. Players even got creative as to how the robots were standing which was fun - some where soldiers marching, others were waving while others were spread-eagle. 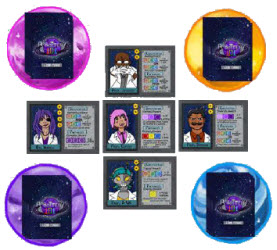 There are enough twists and phases in Robottery 101 that it makes it fun to play such as the study group phase where you can trade parts in your inventory, sabotage where you can steal a placed part from someone else's robot if you roll the correct number based on the current calendar and even the fact that you can't see the draw cards until someone picks them up. There is some definite strategy involved as you try to win over the most professors.

Overall we would happily recommend this game to anyone who likes playing tabletop games. You'll want to keep playing over and over since each game poses different challenges. The game has already gone through some visual improvements which makes playing much better. Robottery 101 is well thought out, designed and produced. You won't be disappointed!

The game Robottery 101 should come with the following components. These are based off of the original game and don't include components from any expansion packs or different editions.

Professors will judge everyone's robot. Gain favor with the most professors by building your robot how they prefer and you'll win.

Please keep in mind that the official Robottery 101 rules and instructions could be different depending on the game version you have. The rules below are some of the exact directions that came in the original packaging and will teach you how to play Robottery 101. Download these original PDF game rules or print them for later use.

Share with us your comments, funny stories, tips, advice, strategies, creative ways to play, questions about how to play, problems with the directions or anything you want about Robottery 101. All submissions will be reviewed within 24 hours.

Jessica says:
I just watched their video on how to play and it seems like a really fun game. I bet my boys would get a kick out of it. Very tempted to grab a copy. Thanks for all the info.
©2022 Board Game Capital - About Us