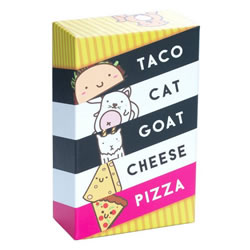 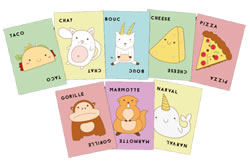 Have you ever heard of a game with such a bizarre name? Taco Cat Goat Cheese Pizza is a card game where players repeat the game name over and over in hopes of the card actually being what they are saying. If it is, you slap the pile in the middle of the table. If you are the last one to slap the table, you get to keep all the cards that you just slapped. You don't want this since you're trying to get rid of all your cards. Don't worry, there is a curve ball with special cards that make you act like an animal and still smack the center deck. 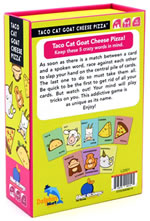 Taco Cat Goat Cheese Pizza is a game where the hardest thing to remember is the name. After saying it a few dozen times, you'll pick up on it - and you'll want to since you'll get penalized if you say it wrong or too slow on your turn. This game is fun and pretty fast paced so games don't take too long. There will be plenty of slapping and card discarding as you chant the game's name the whole time. Learning how to play only takes seconds and gets the whole group playing. Get your copy of Taco Cat Goat Cheese Pizza today so you can join in playing this hilariously simple (and random) game.

The game Taco Cat Goat Cheese Pizza should come with the following components. These are based off of the original game and don't include components from any expansion packs or different editions.

To win the card game Taco Cat Goat Cheese Pizza, you'll need to get rid of all your cards. But that's not all, you'll also need to be the first to slap your hand on the Central Pile of cards when you see a Match or a Special Card appear.

Perparation: Shuffle and then distribute all the cards evenly amongst players, face down. Players must not look at their cards while placing them in a draw pile in front of them, face down.

Game Play: The person to the dealer's left puts a card into the center, face-up, saying "Taco". The player on their left then puts their card face-up on top of the previous card, while saying "Cat". Play continues in this way (going "Taco", "Cat", "Goat", "Cheese", "Pizza", "Taco", "Cat", "Goat", "Cheese", "Pizza" ...etc.) until the following happens: The card that has just been put down matches the word spoken by the player (e.g., They put down a ‘Pizza' while saying "Pizza").

At this point, all players must SLAP their hands on top of the pile of cards in the center, and the LAST player to do so takes the entire Central Pile and puts them on the bottom of their Draw Pile. Then the player who picked up the cards starts off the next round saying "Taco", the next player "Cat", next "Goat"....etc.

All players must complete the following actions immediately when a special card is revealed, and then SLAP the pile. If a player does the wrong action and doesn't correct it before slapping the pile, or is the last to slap the pile, they must pick up the cards. Here are the three special cards to watch out for, and what to do when they show up.

Gorilla: All players beat their chest.
Groundhog: Players knock on the table with both hands.
Narwhal: Everyone slaps their hands above their head to form a horn.

When a player has used all of their cards, they continue to say "Taco", "Cat", "Goat", ...etc in turn, and still have to SLAP the pile when a match occurs or if a special card appears. The game ends when a player with no remaining cards is the FIRST to correctly SLAP a Match or Special Card!

Share with us your comments, funny stories, tips, advice, strategies, creative ways to play, questions about how to play, problems with the directions or anything you want about Taco Cat Goat Cheese Pizza. All submissions will be reviewed within 24 hours.

Val says:
What a dumb sounding card game that actually turned out to be pretty fun. Wasn't hard learning how to play either with the easy rules. Great for parties of almost all ages.
©2022 Board Game Capital - About Us