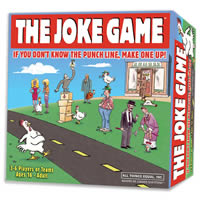 How To Play The Joke Game (Instructions)

The Joke Game is a board game of witty and spontaneous punch lines and jokes. The Joke Game includes hundreds of hilarious jokes. You'll be rolling on the ground with laughter as you make up your own punch lines. If chosen, you're one step closer to becoming the Joke Game champion.

This Joke Game is a good party game where you'll really get to see the funny side of those you play with. Playing this game with those 13 and older is recommended. Learn more about the Joke Game and play it today!

The game The Joke Game should come with the following components. These are based off of the original game and don't include components from any expansion packs or different editions.

The first player to reach the win space and then write the correct or funniest original punch line on any turn wins the game The Joke Game.

Please keep in mind that the official The Joke Game rules and instructions could be different depending on the game version you have. The rules below are some of the exact directions that came in the original packaging and will teach you how to play The Joke Game. Download these original PDF game rules or print them for later use.

Share with us your comments, funny stories, tips, advice, strategies, creative ways to play, questions about how to play, problems with the directions or anything you want about The Joke Game. All submissions will be reviewed within 24 hours.