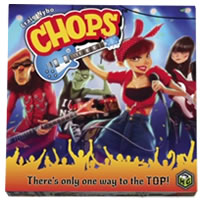 How To Play Chops (Instructions)

Do you have the "chops" to become a superstar? This board game will put your rocker skills to the test as you'll need to manage artists, instruments, handle surprises and play at venues. Player will collect cashola that will help them in their search for buzz, which is what everyone is trying to have the most of.

Chops is an interesting game that tailors to the hidden rock star in all of us that just wants to get out there and jam. Great for up to six players, this game will put your skills to the test. Give the game Chops a try today. 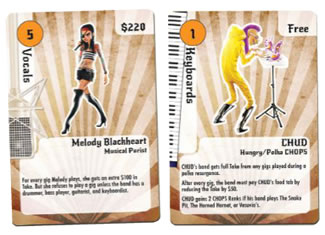 After opening up the high quality game box and seeing the equally high quality game pieces, we were excited to get playing another great game from 3 Headed Giant Games. We found a large thick game board, some really cool musically themed game pieces including thick cardboard guitar picks, play money and some band/musical type cards neatly in their compartments. The rule book was large and after a few minutes we were still reading, and reading and realizing this game was a little different than the rest we've played.

Chops is a moderately hard game to learn how to play (in our opinion) due to all the rules of which cards can do what, what turning your cards in specific orientations means, stipulations on what can and can't happen, etc. Dealing with injured musicians, killed musicians, demoralized musicians, musicians without instruments and special instrument cards are just an example. 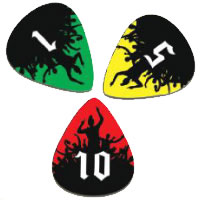 It has a steeper learning curve than your average leisurely played game. Once you do learn the rules, game play starts to become more fun and you can start introducing some strategy. Luck plays a huge part in this game but it can be leveraged quite nicely to your advantage.

We thought the details of the game were meticulously thought out and have a strong musical/instrument/band feel to it. If music or bands are not your thing, you might get overwhelmed or loose interest quickly. The real appreciation of the game can be found by those that have close ties to music. Something else to keep in mind is the stronger sense of money - you'll have to worry about change and being your own banker.

All that aside, Chops is a great board game that plays surprisingly fast. Each game is different with new challenges to cope all under different circumstances. We think Chops has great potential. After one game, some were done but others wanted to play again. The real world aspect to the game felt very similar to what a band manager would deal with. We felt this introduced a more serious game play rather than the crazy quirky game you might expect due to the amount of rules. The venue cards are fun and have some lighthearted humor to them. Definitely a fun game if you know what you're getting yourself into.

The game Chops should come with the following components. These are based off of the original game and don't include components from any expansion packs or different editions.

The band with the most buzz wins.

Please keep in mind that the official Chops rules and instructions could be different depending on the game version you have. The rules below are some of the exact directions that came in the original packaging and will teach you how to play Chops. Download these original PDF game rules or print them for later use.

Share with us your comments, funny stories, tips, advice, strategies, creative ways to play, questions about how to play, problems with the directions or anything you want about Chops. All submissions will be reviewed within 24 hours.