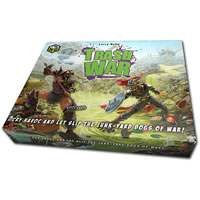 How To Play Trash War (Instructions)

Trash War, a card game of medieval junk-yard combat, matches players against each other in a land-fill battle arena. This fast-paced game moves away from traditional turn-based play. Players follow the action, forming alliances and gutting out grudge matches while attempting to destroy each other's rampart walls. This is what happens when the landfill shuts down - can you survive?

In this unique card game, two to five players will take approximately 20 minutes to duke it out to find the trash champion. Experience the quality of 3 Headed Giant Games with Trash War - professionally made, very entertaining and somewhat challenging. Get your copy of Trash War today. 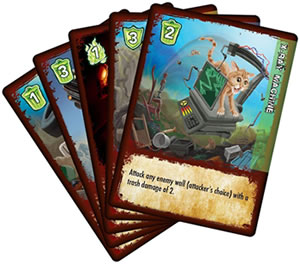 When have you ever been able to play a game where you get to throw trash at each other's wall or deflect that trash to other player's wall? Or better yet, dish the trash right back to the person that tried to destroy your wall with it? Trash War is an exciting game where trash gets flying, deflected and even burned to try and save your three walls. Our favorite part of the game - everyone can be involved on everyone else's turn making this a very busy game. There is no waiting for your turn. This makes for a lot of action and involvement.

A quick read through the nicely put together game rules and you'll be off and playing. We referenced the game rules very little during the first play through which is always a good sign that they are well written and easy to understand. The game setup is simple and effective with each player having their wall cards laid out in front of them and trash being piled up on top of them. The total amount of trash points on each wall is easily visible too. Great game setup. 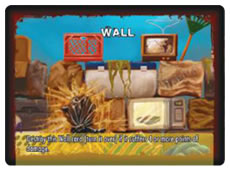 The strategy in the game is mostly based on the luck of the draw but you'll need to decide when to use certain cards to your advantage. Some cards force you to dish the trash to a specific player, evening out the trash revenge. We also thought it was interesting to have two different discard piles, one of which cannot be used again in the reshuffle. This brought an interesting aspect to the game although at times it was a pain to make sure you put the right card in the right pile. You get used to it though.

Overall a really fun game that you can learn how to play and complete a game quickly. With the amount of involvement from everyone it makes a very interactive and action packed game. You never know where your trash will end up. The artwork is great and build quality of the game pieces is what you'd expect from the great designers of this game. Totally recommended if you want a battle type card game without getting really deep into a dark strategy card game. The more people playing the better the experience.

If you are the last player with at least one standing wall then you win.

Please keep in mind that the official Trash War rules and instructions could be different depending on the game version you have. The rules below are some of the exact directions that came in the original packaging.

Share with us your comments, funny stories, tips, advice, strategies, creative ways to play, questions about how to play, problems with the directions or anything you want about Trash War. All submissions will be reviewed within 24 hours.