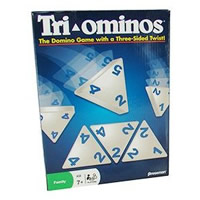 How To Play Tri-Ominos (Instructions)

Tri-Ominos will get the whole family involved and will give you fun entertainment for hours. The game is as easy as matching numbers with numbers that are listed on your Tri-Ominos. Sound easy? Try again! While strategy is not necessary, it can be a huge part of Tri-Ominos.

Players match numbers from their Tri-Ominos or draw from the "well" until a match is found. Each Tri-Omino pulled from the "well" docks you points but will be rewarded once discarded. Closing a hexagon or building a bridge will earn Tri-Ominos players as many as 50 bonus points. Give Tri-Ominos a try tonight and see who can become the Tri-Ominos champion.

The game Tri-Ominos should come with the following components. These are based off of the original game and don't include components from any expansion packs or different editions.

Be the first player to score 400 points. Each game consists of several rounds.

Please keep in mind that the official Tri-Ominos rules and instructions could be different depending on the game version you have. The rules below are some of the exact directions that came in the original packaging and will teach you how to play Tri-Ominos. Download these original PDF game rules or print them for later use.

Share with us your comments, funny stories, tips, advice, strategies, creative ways to play, questions about how to play, problems with the directions or anything you want about Tri-Ominos. All submissions will be reviewed within 24 hours.

Tracy says:
Is there a triominoes game higher than 5-5-5?
Shirley Cavanau says:
Only One player reached 400 during the last round Another player went out but only reached over 400 after the bonus points were added to his score Who is the winner
John says:
If a player plays a tile that makes up two or even three hexagons does he get to score each one, or just one?
Benjamin says:
If a player plays a tile that makes up two hexagons does he get to score both or just one.
Darlene says:
If you are playing with only two players, and are unable to play from your hand and there are no tiles left in the well, do you deduct 10 points from your score and then you're out of the game; or do you continue to deduct 10 points from your hand every time your opponent plays if you cannot play on his/her tile that he/she plays?
Helen says:
Like Robert asked 12/31/18 when u have to draw tiles from the well, do u keep the unused tiles in ur hand or r they returned back in the well?
Brit says:
Hey guys, what happens if at the end of a round no one can play but we all have one tipe left? How do the rules not mention this? Also thr 800 number goes nowhere anymore.
Robert says:
The rules say when drawing from the well, you keep them separate from your hand and subtract 5 for every tile till you get one you can play. But they don't make it clear if you return the not matching once since you kept them separate or if they were only kept separate for counting then you add them to your hand?
Adelina says:
Is each tile unique? Or are there sets of identical tiles?
Natalie Hernand says:
We play with a completely different set of rules. The person to start is the one who has a 5-5-5, or if not a 5-5-4, or if not a -5-5-3 etc etc until someone comes out and starts the game. We then play with the aim of getting rid of your tiles first - except you don't count the value of each tile played. You try and get rid of the highest tiles as quickly as possible. The first person to lay down their last tile wins the round and gets zero points. Each player then counts the value of the tiles left in their hand. Keep playing additional rounds until someone reaches 50, or whatever value you pick. The player with the smallest total number at that time wins the game. If you are able to play a piece that matches 3 numbers then you get to throw away a piece of your choice on your shelf. A bridge gives you no extra benefit. It's just another way to put down your tiles. If you can't play - you pick up one extra piece from the remainder pack turned down on the table. If you can play it, you can do so immediately. If not, it joins the remainder of your tiles on your shelf. This version is great to play with all age groups as long as they know their numbers and can match - we've played with three year olds and very old seniors in the same game. The little ones get surprisingly strategic very quickly. You can also play with teams to help the very young, very old or those suffering from brain injuries etc. It's a great way to play this game. We have taken it on vacation all around the world. We have left games and sent games to people in Europe, South America, Asia and even as far as the Gobi Desert. You do not need to speak the same language as this version of the game is self explanatory. We have bought so many copies of this game as gifts. In local stores, I used to buy all copies of the Deluxe version as they came in. Also the travel version is good quality. I dislike the cheap hollowed out plastic version (the ones without the brass knobs). They don't shuffle well, are too light and they don't stand well. My only complaint is that the plastic shelf stands often break on the back end foot part. I am going to get a woodworking person to make me wooden shelves that will be a lot more sturdy.
Darlene says:
Yes, when picking from the well. You pick till you have one that will play.
Bill says:
Lets say I'm over 400 and the other person goes out with 350. Add 25 bonus points and 34 from my remaining tiles. They end up with 409 while I ended with 450. Who wins? The rules say if both reach 400 during the round, the person who goes out wins. I sat the other person didn't reach 400 DURING the round. Who wins?
Rich says:
We usually play the game with 4 people. When drawng from the well we stop at 5 tiles which gives everyone a fair advantage.
Paul says:
Once there are no picks available in the well and the board is blocked, the person with the fewest number of tiles remaining wins the round, but who wins if there are 2 players with the same number of tiles remaining?
Paul says:
Does one continue to pick from the well until a match is found?
Mia says:
You keep all you pick from the well
Diana says:
After you have found a match from the well do you return the unmatched tiles to the well?
Lynn says:
If you pick from the well do you keep the tiles in your hand
Denise says:
Question: If your play matches one side of an adjacent tile, but the number on the open end (angle), does not match the other numbers in the 'hub,' is this allowed?
©2023 Board Game Capital - About Us