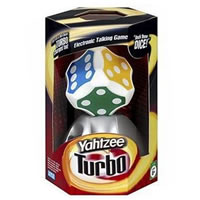 How To Play Yahtzee Turbo (Instructions)

Want a twist on the traditional dice game of Yahtzee? Give Yahtzee Turbo a try! Players first turn a card over and begin rolling the dice like crazy trying to match the pattern on the card.

There is a fun twist as the speed detecting die adjusts to your speed! In Yahtzee Turbo, it is a race to discard all your cards. Yahtzee turbo can even be played alone with one to four players. So get rolling and roll fast in Yahtzee Turbo.

The game Yahtzee Turbo should come with the following components. These are based off of the original game and don't include components from any expansion packs or different editions.

Be the first player to discard all the cards in your hand.

Please keep in mind that the official Yahtzee Turbo rules and instructions could be different depending on the game version you have. The rules below are some of the exact directions that came in the original packaging and will teach you how to play Yahtzee Turbo. Download these original PDF game rules or print them for later use.

Share with us your comments, funny stories, tips, advice, strategies, creative ways to play, questions about how to play, problems with the directions or anything you want about Yahtzee Turbo. All submissions will be reviewed within 24 hours.

Jen says:
I gave this as a gift for Christmas last year to my mother in law who is obsessed with Yahtzee. She loves it. She likes that it is a little more fast paced than the original. The rules are pretty similar but enough different that it makes it fun.
©2022 Board Game Capital - About Us