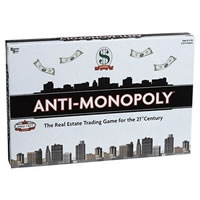 How To Play Anti-Monopoly (Instructions)

Anti-Monopoly is a new spin on the classic old game of Monopoly. In the game of Anti-Monopoly there is a fight between free market competitors and ruthless monopolists. If you like the classic Monopoly board game, this will open up a whole new way of thinking.

Players have to choose whether they want to be a free enterprise or a monopoly. After choosing, the players have to stick to a certain set of rules. Try playing both sides to have a different spin or version of the board game Anti-Monopoly. Check out the new, fun game of Anti-Monopoly.

The game Anti-Monopoly should come with the following components. These are based off of the original game and don't include components from any expansion packs or different editions.

Please keep in mind that the official Anti-Monopoly rules and instructions could be different depending on the game version you have. The rules below are some of the exact directions that came in the original packaging and will teach you how to play Anti-Monopoly. Download these original PDF game rules or print them for later use.

Share with us your comments, funny stories, tips, advice, strategies, creative ways to play, questions about how to play, problems with the directions or anything you want about Anti-Monopoly. All submissions will be reviewed within 24 hours.

Mojo says:
Playing with 4 players. Does each monopolists have to own 2 streets of same color or both monopolist own one each street to build houses?
Chris says:
We need clarification on rule 10 bullet point 5. It is really unclear as a previous comment explains.
Scott says:
We need clarity on a portion of the rules about "What Monopolists and Competitors can do in a City". Bullet 5 says: monopolists (who own 2 of 3 streets) cannot build on a 3rd street (if not owned) and can only collect the "No Houses" rent. Does that mean, they cannot collect more than "No Houses" on their 2 owned streets or does it mean they get to collect "no house" rent on the other person's street (as part of the monopoly of the city)?
Robert Heulings says:
Where can I get a Rule Book for Anti-Molopoly II. I bought the game used and it has no directions or Rule Book
Kathy says:
Question On selling mortgages it says Sold to Other players as mortgaged properties at any agreed price Who decides on the "agreed price"
kathy says:
Great game, but in the printed instructions when a Monopolist lands on the Anti- Monopoly Foundation space the instructions state pay $160 dollars, on line it says pay $10. which is the correct payment? Thank you
Jed says:
Hilarious game. I've never played a game where you tried to do as bad as you possibly can. You are even suppose to be mean to other players. Very different and funny to learn how to play.
Shawn says:
I remember skipping school and going home to play this with my brother. We loved monopoly and thought it was hilarious to play a game that had rules that were completely opposite from the real game. Fun concept for a game.
©2022 Board Game Capital - About Us