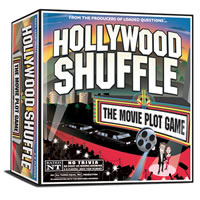 How To Play Hollywood Shuffle (Instructions)

Hollywood Shuffle is an interesting board game where you write the movie any way you want to. Plot elements are revealed (such as the lead character, the action or twist) by rolling the dice. Then players must write down the cast, ending or title of their new movie. All answers are read aloud and the fun begins.

The game Hollywood Shuffle should come with the following components. These are based off of the original game and don't include components from any expansion packs or different editions.

There are no right or wrong answers in Hollywood Shuffle. Players choose their own title, cast, or ending to their movie. No movie trivia knowledge is required.

Please keep in mind that the official Hollywood Shuffle rules and instructions could be different depending on the game version you have. The rules below are some of the exact directions that came in the original packaging and will teach you how to play Hollywood Shuffle. Download these original PDF game rules or print them for later use.

Share with us your comments, funny stories, tips, advice, strategies, creative ways to play, questions about how to play, problems with the directions or anything you want about Hollywood Shuffle. All submissions will be reviewed within 24 hours.

Halaloya says:
IT sounds fun
©2023 Board Game Capital - About Us