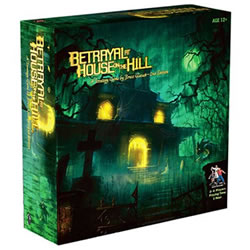 Betrayal At House On The Hill Game Rules

How To Play Betrayal At House On The Hill (Instructions)

Betrayal at House on the Hill is a board game set in a haunted mansion, where players take on the roles of characters exploring the house and encountering various supernatural events and monsters. As the game progresses, one player will betray the others and a new, unique "haunt" scenario will begin.

The game is played over several rounds, and players take turns moving their characters through the house, exploring rooms and discovering new events and items. The game also includes a deck of event cards that can trigger various supernatural occurrences, such as ghosts and monsters appearing.

As the players explore the house, the game's "haunt" mechanism is triggered, and one player will become the "traitor," while the others will become the "victims." The traitor's goal is to complete their specific objective from the chosen haunt scenario, while the victims' goal is to survive and stop the traitor.

The game has received positive reviews for its unique mechanics, high replayability, and spooky atmosphere. It's a horror-themed game, but it is not considered as a horror game, it's more of a thriller with a touch of horror. It's recommended for players who enjoy games with a lot of replayability and a strong theme.

Great as a Halloween game or for any occasion when you want to play something a bit spooky, Betrayal At House On The Hill is a different game every time with new an interesting lay-outs. This fun and suspenseful game lets you explore "that creepy old place on the hill." But wait, while you're having a mystic misadventure one of you will turn on all the rest.

Betrayal At House On The Hill has a very high replay value since everything in the game changes so much from game to game. This is a very good game for 3 to 6 players an will give you hours of fun. Do you have what it takes to win the game or will it freeze the heart of any horror fan? Pick this game up today!

The game Betrayal At House On The Hill should come with the following components. These are based off of the original game and don't include components from any expansion packs or different editions.

If you are the first traitor or hero to complete its goals for the haunt you will win.

Share with us your comments, funny stories, tips, advice, strategies, creative ways to play, questions about how to play, problems with the directions or anything you want about Betrayal At House On The Hill. All submissions will be reviewed within 24 hours.