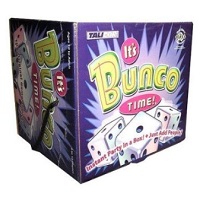 How To Play Bunco (Instructions)

Bunco has been around of many years but is still a great dice game to play at your next party. It is simple to explain how to play, easy to slip in your pocket or purse and is not complicated. Bunco is great for larger groups and is a fun social game.

Bunco is a game where players take turn trying to roll the correct number on their die. Player with the most points wins the game and people will rotate around from the looser table to the head table. Give Bunco a try and find out what others are talking about when they can't stop talking about all the fun they had the night before playing Bunco with their friends and family.

The game Bunco should come with the following components. These are based off of the original game and don't include components from any expansion packs or different editions.

Win the most points by correctly rolling the right number in rewarding combinations which will move you to the head table.

Please keep in mind that the official Bunco rules and instructions could be different depending on the game version you have. The rules below are some of the exact directions that came in the original packaging and will teach you how to play Bunco. Download these original PDF game rules or print them for later use.

Share with us your comments, funny stories, tips, advice, strategies, creative ways to play, questions about how to play, problems with the directions or anything you want about Bunco. All submissions will be reviewed within 24 hours.

Bonnie says:
I have a "tie" question. My Bunco group awards 3 prizes: 1) player with the most Buncos 2) the player with the highest score and 3) the player with the lowest score. We had 2 players that earned 2 Buncos each AND their final score also totalled the exact same. Is the winner of "the most Buncos" determined in a roll-off? If so, is the "loser" of the most Buncos considered for the 2nd prize of "high score?"
Diane says:
Need to know..dice leaving my hand and bell rings. Does that roll count? Can't find this rule anywhere.
Seth says:
Rules say game stops when bell is rung. I interpret that as everyone freezes. If there is any action after the bell that would be considered extra game play and deemed illegal (even if it's tallying up points). I can see there is a gray area here so maybe set the rule before you start what actions can be done after the bell rings.
Jack says:
My sister is obsessed with this game and is planning on playing it with the entire family for Thanksgiving. We'll see how it goes and if everyone can learn how to play. She says the Bunco game rules are easy.
Ed says:
I have heard a lot about Bunco but had never played it till last night. A pretty fun game for how simple it is to play. It worked well cause we had a large group of people. Rules were quickly explained and we were playing in no time.
©2023 Board Game Capital - About Us