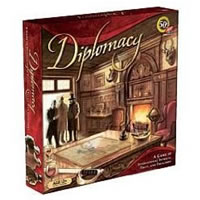 How To Play Diplomacy (Instructions)

Diplomacy is a fun World War One game where military forces invade and withdraw, shifting borders and altering empires. Build alliances or become a traitor as you plot to gain control over the continent.

The Diplomacy board game is not just a game of chance, but involves being clever, cunning, and much strategy. If you like war board games, Diplomacy is rated one of the best. Try the board game Diplomacy today!

As soon as one Great Power controls 18 supply centers, it's considered to have gained control of Europe. The player representing that Great Power is the winner. However, players can end the game by agreement before a winner is determined. In this case, all players who still have pieces on the game board share equally in a draw.

Please keep in mind that the official Diplomacy rules and instructions could be different depending on the game version you have. The rules below are some of the exact directions that came in the original packaging.

Share with us your comments, funny stories, tips, advice, strategies, creative ways to play, questions about how to play, problems with the directions or anything you want about Diplomacy. All submissions will be reviewed within 24 hours.


Mad Roy says:
This is a hugely amusing and entertaining game, especially if beer is involved. The guy who breaks the most promises to other players usually wins. Definitely a game of strategy, with no dice to mess you up with bed rolls.
Scott says:
My favorite game
Matt says:
Great war game! 5 stars is my rating!
Huge List Of
Free Board Game
Giveaways!