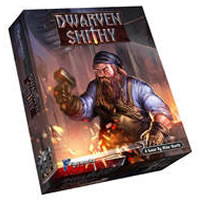 How To Play Dwarven Smithy (Instructions)

Take on the role of Dwarven blacksmiths as you attempt to craft items in your workshop based on resources like metal and gems that you gather. You'll need to build weapons, armor and shields and sell or use your cards wisely. Do you sell? Discard? Buy? With a lot of options, you're really playing against yourself with the aid of others to gain the most points.

Dwarven Smithy will immerse you in a well themed mining and crafting game that is a lot of fun to play over and over again. Great for up to four players and it will take an hour or so to play. The game is more of a journey or quest that really engages your mind and is entertaining to watch the other players. Order you copy of Dwarven Smithy today. 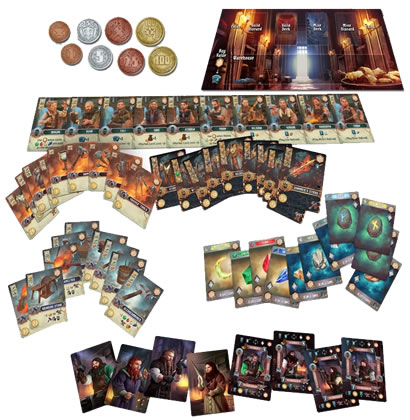 If you want to step back in time and become immersed in a metal forging themed game, then this is an awesome game for you. We really enjoyed the overall theme of this game and everything matched and fit together nicely. Dwarven Smithy is a hand management type game where you'll need to make the best combinations to earn you the most points. If you think you'll like this game you will. If it looks interesting but feel intimidated, don't. It plays really well and is a lot of fun.

A few minutes to get yourself familiar with the rules and you'll be off and playing. The rules are fairly straight forward and we were impressed by the game rules. There is a moderate amount of game rules to keep track of but they become easy to remember and almost intuitive as you play. We also really liked that you got two helper cards to aid you during the game play. Some games leave you in the dark but this game goes the extra mile and provides that for you.

If we haven't already mentioned it, the theme for this game is awesome. The art work is amazing and that mixed with the game piece quality really make this game a bargain for the selling price. You'll get a lot of high quality cards, a thick game board and sturdy coins to play with. Applause for the game makers for bringing together a high quality game and you sense that once you lift the lid to the game. 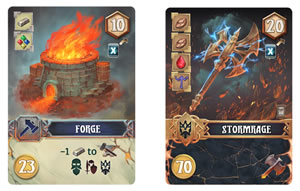 We really like some aspects of the game. We thought the concept of having to refine your elements was clever and liked how cards had different values based on their current state. We played with four players and while there was a lot going on, the game mostly played with people trying to make do with what they had. There was some selling and discarding which introduced some strategy but it didn't feel like a cut throat nor fast paced experience. It was interesting seeing what others were doing and how they were doing it. Dwarven Smithy has a high replay value and sucks you in. We think it had just enough strategy and luck mixed with a more laid back gaming experience.

Rarely do we ever not have any complaints about a game but we are scratching our heads trying to think of something we didn't like...still scratching. We think this is a well thought-out game that just works. There are even two variants to the rules. One of which alludes to a never ending game. Flashbacks to our childhood when we played Monopoly for days with add-on packs of money. Buy a copy of Dwarven Smithy and you won't be sorry.

Have the most coins at the end of the game and you'll be the winner.

Please keep in mind that the official Dwarven Smithy rules and instructions could be different depending on the game version you have. The rules below are some of the exact directions that came in the original packaging. Download these original PDF rules or print them for later use.

Share with us your comments, funny stories, tips, advice, strategies, creative ways to play, questions about how to play, problems with the directions or anything you want about Dwarven Smithy. All submissions will be reviewed within 24 hours.


Kevin says:
I saw this on Kickstarter and almost bought it. I may have to now. Thanks for the review.
Ben says:
I playtested this at GenCon and subsequently Kickstarted it and bought the deluxe edition with the metal coins. Can't recommend it enough
Huge List Of
Free Board Game
Giveaways!