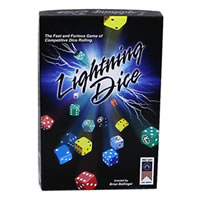 How To Play Lightning Dice (Instructions)

Lightning Dice is a fun dice game where all players get to play at the same time. This dramatically speeds up play time and makes it fun for everyone to play together. It takes a combination of luck and skill to win but mostly requires a quick eye and fast reflexes.

Move your way up the score board as you try to become the Lightning Dice champion. If you can score 20 points first then you win. With up to six people playing, this is great for families and friends alike. Check out this fun and unique dice game and grab a copy for yourself. 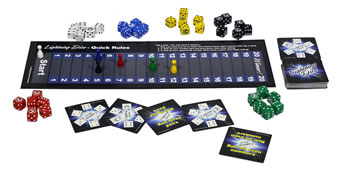 When you think of lightning, you think of fast. What a perfect name for this dice game: Lightning Dice. By the time you're done playing you'll feel like your arm and hand got hit by lightning due to the repetitive and vigorous dice rolling involved (joking about the pain). We played this a couple times and had such a blast, or should I say a thunderous time, playing it.

Wild East Games, the maker of Lightning Dice, keeps quality at the top of their list and their games reflect that. A sturdy well built box, high quality square cards, a thick score board, nicely made custom dice and pawns all come with the game. Lightning Dice is a unique game that includes a lot of dice (36 to be exact), playing cards and a game board for keeping score. You're getting the best of all tabletop games in one. 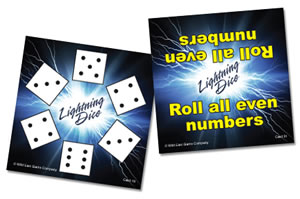 After reading through the standard rules before playing (there are three rule variants total), we instantly realized that this was going to be a mad-house-free-for-all as everyone attempts to desperately roll over and over until they get the matching set that is indicated on the play card - and that is was! We loved the quick pace of the game, no turns, no waiting, just go go go. While everyone is trying to score for themselves, the best part of the game is you can turn destructive and roll to move someone back on the score card. More than once, the current leader in the game was sent back and dethroned by the second or third in line. You had no guarantee you would win until you did.

We did two things to help adapt this game to a younger audience (a six year old was playing). Aside from reading the written cards to them, we made little number cards that each player was given so they could remember which player number they were. The second thing was instead of every player playing to the same card, each person played on their own card allowing everyone to place the dice that matched right on top of their card. That made it much easier to know which dice you still had to match. I'm sure there are many other ways to play which make this game very adaptable to custom rules. 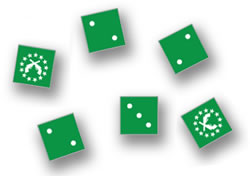 The strategy in Lightning Dice is very simple yet very challenging since you are still at the mercy of the dice. You can try to give yourself the best odds but at times that doesn't work. The competition and adrenaline rush of this game is superb. Everyone going head to head each round makes game play very addicting. A game that takes 20 seconds to explain how to play, involves up to six players and plays that quick with so much fun is a keeper for sure!

The winner is the first player to reach 20 points by matching the required numbers of the face up goal card.

Please keep in mind that the official Lightning Dice rules and instructions could be different depending on the game version you have. The rules below are some of the exact directions that came in the original packaging.

Share with us your comments, funny stories, tips, advice, strategies, creative ways to play, questions about how to play, problems with the directions or anything you want about Lightning Dice. All submissions will be reviewed within 24 hours.


Greg says:
Years ago we very crudely made a game that was similar to this game and we enjoyed playing it. The rules are slightly different but the concept it the same - rolling dice to match the pattern. Fun to see that someone took this all the way to production.
Huge List Of
Free Board Game
Giveaways!