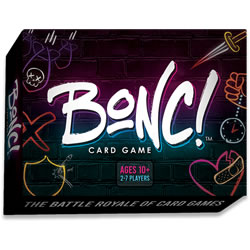 How To Play Bonc! (Instructions)

Bonc! is an exciting and slightly strategic family friendly card game where you try to penalize the last player to play - not the next. Players will Bonc! past players and take away 1 or more lives in an attempt to Bonc! them out of the game. You can use special action cards or simply match the card that was previously played. Doing so will Bonc! them and take away lives. Loose your lives and you're out of the game so protect them at all costs and use your shield card quickly.

Most games last between 15 - 30 minutes and always have some fun twist you didn't see coming. Do you go for the Bonc! in hopes you don't get penalized with a double or Bonc!? Do you go for a triple Bonc!? This is a great card game that can be learned quickly and last for many many games. Add Bonc! to your card game collection and be sure to add it to your game nights. You'll love it! Purchase your own copy or Bonc! today! 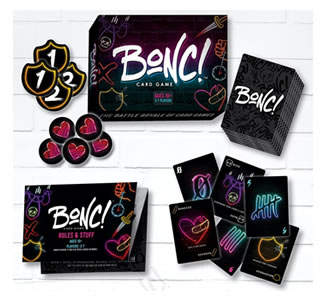 Think of the first 3 seconds after you saw the game Bonc!. Were you a little nervous it was an adults only or after hours risqué game with the black background and neon graffiti style art? Yeah, we thought that too but it's totally not either one of those things. It's a simple, family friendly, super easy to learn and lots of fun to play card game! Let us tell you what we thought of Bonc!.

Bonc! comes with cards and some tokens so the storage box is a little bigger than a typical deck of cards. Components came in zip lock bags and fit fine in the storage box. Nothing earth shattering with packaging inside the box. Art work looks awesome and everything matches in theme. The rules are a folded up, double sided, full color, glossy page that explains things very nicely, concise and with lots of images and examples. We loved this! Unfolding the rules was a little annoying and we would have loved to see it in a nice little book but it serves its purpose very well. Here comes the part where we say our one gripe about the game.

Edit: the game developers are looking into increasing quality and ensure that what we saw in our demo version will be greatly improved when full production starts.
Component quality is lacking...quite a bit actually. If someone would have said this was a homemade game, we might have believed them. We were surprisingly shocked by how cheap the game cards and tokens were. Half of our cardboard style tokens were split in half or had the top layer peeling back slightly brand new out of the box. If this is how they look band new, we're worried for how they'll look after some substantial game time. Cards are very thin and almost looked worn and used on the edges brand new. While we might be able to stomach this for a cheap price (around $5-$10), the current selling price would have me a little upset if I paid that much for quality like this. We also received 12 blank cards in our deck (not sure what those are for)...moving on. 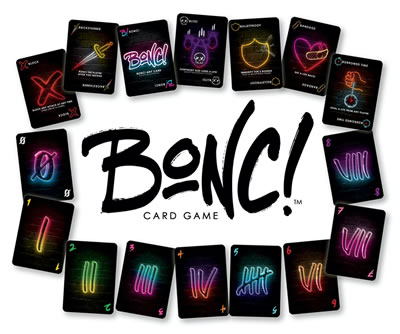 The first time we played Bonc! was with only two players and the game ended in about 3 anticlimactic minutes. We looked at each other puzzled and decided to give it another go. Second round was much better and took about 12 minutes and was way better. We must have had some bad luck or shuffled poorly the first time. There is a bit of strategy that could be implemented in this card game but it always seems to get ruined by what others do – a good thing. We loved the action cards, the shields and the life tokens and the idea to repurpose the game box as the Pit of Doom. Clever! I'm resisting the urge to compare it to Uno because it is way different and much more fun.

For some reason we had a hard time keeping track of and using the shield cards. It seems like a very straight forward no brainer thing but we either forgot to turn it over or were confused if it ran out this round or after we played one more. We also had our brains flip a few times and switch in Uno mode where the next player gets penalized instead of the previous player. We had to keep reminding ourselves that this is not how this game goes.

We had a blast playing this game and went several close rounds with four players. We felt the more players the more fun it was. It's impressive seven players can play. If you are looking for a fun party style card game that you can pull out and play in no time, Bonc! is your game. We loved yelling BONC! as we attacked others. We even had a seven year old playing with no problem. Great game to have and play - we just wished it was slightly better quality or less expensive.

The game Bonc! should come with the following components. These are based off of the original game and don't include components from any expansion packs or different editions.

Be the last player with at least one life token and you'll be the Bonc! champion.

Please keep in mind that the official Bonc! rules and instructions could be different depending on the game version you have. The rules below are some of the exact directions that came in the original packaging and will teach you how to play Bonc!. Download these original PDF game rules or print them for later use.

Share with us your comments, funny stories, tips, advice, strategies, creative ways to play, questions about how to play, problems with the directions or anything you want about Bonc!. All submissions will be reviewed within 24 hours.