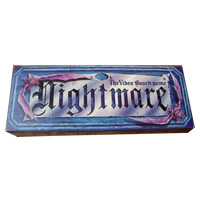 How To Play Nightmare (Instructions)

Nightmare, the Video Board Game, is an exciting game that will have you and your opponents racing to be the first to the Nightmare square in the middle of the game board. The game of Nightmare never ends up the same twice. Once you hit the play button there's no turning around in this fun game of thrills and chills.

Once the game starts you have one hour to win or you'll lose everything to the Gatekeeper. Turn the sound up on your TV to make the game more interesting. Keep up with what's going on or you might just find yourself in the black hole.

Nightmare is a board game controlled by a video tape. Once you insert the tape into your VCR and press Play, the game begins. It is a race against time and against the game's host, The Gatekeeper. Once you press Play, you cannot Pause or Rewind the tape. The Gatekeeper considers it "cheating" and wins the game by default.

The aim of the game is to collect all 6 of your character's keys and then race to the center of the board; the Nightmare square. You must land on the Nightmare square by exact roll, wait your turn, and attempt to roll a 6. When you roll a 6, take the top Nightmare card. If it's not your greatest fear, race to the VCR machine and press Stop to win!

But once the tape reaches 60:00 minutes, The Gatekeeper wins!

Perparation: Players should be seated in a semicircle, facing the screen.

Sort, shuffle, and place the Time, Fate, and Chance cards on the board.

Sort, shuffle, and place the six sets of keys off to one side of the board -- the six black keys in one pile, 6 red in another, etc.

Place the coin on the board. Players will be required to "toss" the coin at various stages during the games.

Each player should take a Nightmare card and, on the blank side using the marking pencil, write their Greatest Fear; spiders, snakes, heights, etc. Don not reveal your fear to the other players. Collect, shuffle, and place these cards on the center square face down. (The Nightmare cards can be "erased" and used over again.)

Place the 6 playing pieces and the 6 numbered discs into the bag. Each player then takes a turn to draw out a playing piece and a disc. Slot the disc into the base of the playing piece. If less then 6 players are playing, return the remaining play pieces, discs, and keys to the tray.

This becomes your gravestone and you should watch it throughout the game, for if an opponent lands on your gravestone, you have have fate cards or keys which can be used against that player.

Game Play: In the game of Nightmare each character has 6 keys. Each key gives you a specific power and the more keys you collect, the more powerful you become. For example, if you collect a key which releases you from the black hole, you can use it over and over again without returning it unlike some fate cards which can only be used once.

Keys are awarded by the gatekeeper and can also be won of the board. For example, if you are number 6 and you land on a gravestone marked "Take a key if you are 6", you can collect a key.

Keys can also be won by chance. If you are lucky, you could collect both halves of a key. If you match, return both cards to the bottom of the pack and take a key.

There are other chances to win a key. For example, you may get a card which reads:

If you are Hellin and your number is 6, toss the coin.

If you are Hellin but your number is 3, this card is useless and should be returned to the back of the pack.

Fate cards provide you with power or protection from your opponents.

Most fate cards will require you to toss the coin if an opponent lands on your gravestone. You should wait for your turn to come around before tossing the coin. Toss the coin before you roll the die and move your playing piece.

There are two black hole spaces on the board. If you land on a black hole, or if you are banished to the black hole by the Gatekeeper, you cannot participate in the game unless you are specifically called upon by the Gatekeeper: eg. the youngest, the oldest, the chosen one.

You can be released from the black hole by the Gatekeeper, a key, a fate card or by a player landing on the appropriate space on the board.

How to Play Nightmare

Each player starts the game from his or her character's gravestone and moves in a clockwise direction around the outside circle of stones. Each gravestone, or part of a stone, is counted as a square, even unmarked ones. Multiple players may occupy a stone.

If you land on a stone marked time, fate, or chance, take a card from the top of the pack. If you land on one of the black holes, you cannot play until released.

The aim of the game is to collect all 6 of your keys. Only when you have all 6 keys can you leave the outside trail of stones and begin to make your way to the Nightmare square in the center of the board via one of the 4 paths leading to the middle.

If you are on the path leading to the middle of the board and lose one of your 6 keys, you must return to your gravestone and attempt to win the key back.

When you have landed on the Nightmare square, you must wait your turn and try to roll a 6, take the top Nightmare card from the pack. If it is not you greatest fear, race immediately to the VCR machine and press stop to win.

Remember! Nightmare is a race against not only your opponents but the Gatekeeper and if the timer reaches 60:00 minutes, he has won the game!

The Gatekeeper "hosts" the game. If he calls your number or your color or catches you just about to have a turn, you must answer "Yes, my Gatekeeper" and then listen carefully to the task he sets to you.

If you fail to answer him in time, he can become extremely angry. So always answer his questions immediately.

The Gatekeeper will also call for youngest player -- "young one" -- and the oldest player -- "old one". If he wants to know your middle name and you don't have one, use your surname!

If he demands that you "roll a 6" before you can play again, you must wait for your turn to come around before rolling the die.

Players can only move around the board when the Gatekeeper is not on the screen! When the Gatekeeper appears, everybody must stop and listen carefully to what he says because if you miss something, you cannot pause or rewind the tape.

Now....Turn the lights down, turn the volume up and press play.

Please keep in mind that the official Nightmare rules and instructions could be different depending on the game version you have. The rules below are some of the exact directions that came in the original packaging.

We are on the hunt for more information about Nightmare but have not found anything yet. If you have any information regaring the Nightmare game rules or instuctions let us know and we will add it to this page. We will post any updates to this page as soon as we find it.

Share with us your comments, funny stories, tips, advice, strategies, creative ways to play, questions about how to play, problems with the directions or anything you want about Nightmare. All submissions will be reviewed within 24 hours.


Shane overly says:
Where's the assembly part of this
True Playa says:
This game is good but has waaaaay too much to try and keep track of at the same time. it's kind of frustrating! It is a good game if you just wanna sit back and have some fun with some friends while having some drinks lol
danielle rox says:
OMG this game is awesum my mum makes it out to b much scarier than it is coz its not that scary!!!!LOL i just want to play it ova and ova again!!!!!!
Huge List Of
Free Board Game
Giveaways!