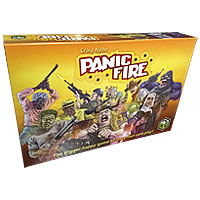 How To Play Panic Fire / Shoot Your Friends (Instructions)

Panic Fire, formerly known as Shoot Your Friends, is a trigger happy, quick moving non-turn based game where everyone scrambles to try to shoot other players out of the game. This is done by completing matches in your hand or other player's hand. When a match is complete, pick up the toy gun and shoot according to the game rules.

If you want a really fast paced game with the slight rush of being shot, Panic Fire is the game for you. When the gun gets picked up you hope it's not you that will be shot. Six rounds make up the complete game so there are extra chances to win the game. Purchase your copy of Panic Fire today! 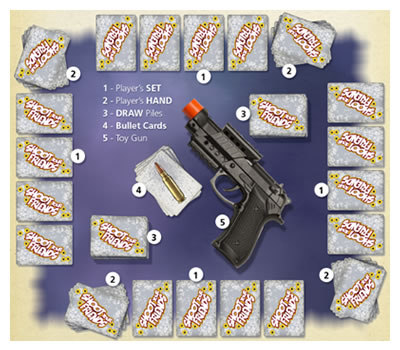 If you ever want to add a whole new level of adrenaline fun to a table top game, get rid of turns so it's a free for all, add some thug looking character cards, oh and go ahead and place a toy gun in the middle of the table that could be used to shoot you out of the game. Panic Fire (Shoot Your Friends) is an ingeniously created table top game that literally is like no other we have ever seen, heard of or played.

After opening the sturdy game box, we saw front and center the large toy gun complete with a scope, screw on silencer and a blue "laser" (light) that actually works. Pull the trigger and the toy gun even shoots (no projectiles). Two nicely packaged decks of cards complete the game and the interior packaging is all custom fit to the game components.

After the first test round that was filled with a few "Wait!" so we could pause the game to clarify any rules questions, the second round went surprisingly fast. After that, we were natural born thugs and ruffians completing sets and shooting other players. When that gun gets grabbed out of the middle of the table, your heart sinks and you hope it's not you getting shot. We question the durability of the toy gun since it is a hot item that gets vigorously grabbed and shot. It worked fine our whole game and hopefully it will last many more games to come. 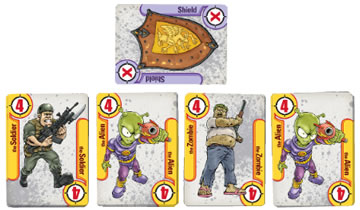 One thing to keep in mind when reading through the game rules is some of the most important information is on the very last page. The rules are separated by a few pages of promotional info for other games. This was true for the game rules that were included in our version of the game. The online version is not like this. Because of this separation, we missed the last page that talked about some key points of the game including the "Great Grandma." That card is a certain death wish for any player and is the best card in the deck to have...or is it the shield...

The playing area for Panic Fire can get pretty out of control and the fast paced nature of the game can get pretty heated. We liked this a lot. It is very much a semi-physical game. With six rounds, everyone has a chance to still win after being shot once or twice. The bullets cards are a great way to keep track of the score. If you know what you are getting yourself into with this game, then you'll love it. It's not for the faint of heart nor slow and steady hand. This will definitely get your game night party started!

The game Panic Fire / Shoot Your Friends should come with the following components. These are based off of the original game and don't include components from any expansion packs or different editions.

The player with the most points (bullets) at the end of the game wins.

Share with us your comments, funny stories, tips, advice, strategies, creative ways to play, questions about how to play, problems with the directions or anything you want about Panic Fire / Shoot Your Friends. All submissions will be reviewed within 24 hours.