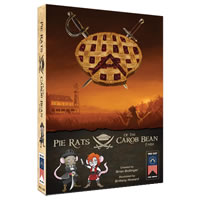 How To Play Pie Rats Of The Carob Bean Farm (Instructions)

Pie Rats Of The Carob Bean Farm (get it?) is a funny spin off of the popular Pirates of the Caribbean. Characters and illustrations are well done and create fun atmosphere for playing the card game (although they hardly resemble anything from the movie). For complete rules on how to play this game, please reference the game rules and instructions listed below.

Players will have a blast playing this game and strategically trying to build up their pies. Make sure you have enough time to play all the way through as this is not a quick card game. Join in the fun and give Pie Rats Of The Carob Bean Farm a try today.

Board Game Capital's Review:
(2017-07-03)
Pie Rats Of The Carob Bean Farm is a clever six phase card game where players attempt to build up their charisma, build up their crew and loot pies to gain points. We loved it! The first time playing was much slower than the subsequent games due to the learning curve. There is a lot going on in this game with the six phases mentioned above. Once you get the hang of it it's not complicated at all and game play becomes much faster. Strategy comes into play once you understand the logistics of playing and this is where it gets fun. 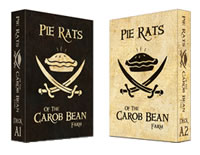 Like all of Wild East games, this game is high quality with great cards, boxes and instructions. We were especially impressed with the rule book that came with the game - 16 pages total. It's that long due to examples, illustrations and is written in a down-to-earth way simply explaining how to play in full sentences (no quick bullet points). We liked this although it took a while to read through and referencing the rules later for a specific question was a bit tricky. But, we feel like we better understood the game after the first time reading the rules so it was worth it.

The cards are well done with fun illustrations and variety. It was enjoyable seeing all the different crew cards. We especially liked the phase cheat sheet card when we were first learning how to play. We also noticed that there were blank captain, crew, charisma and pie cards that we are assuming we could make our own cards. Nothing was mentioned about this in the game rules. 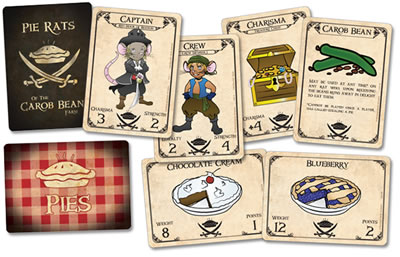 There are only 4 professionally done captains which we're guessing in order to have up to six people play you'd need to create two of your own captains from the blank captain cards. While this may appeal to some people, we would rather have the game come complete with no options to customize your own cards. They would look so out of place and tacky compared to the official cards.

Playing the game is engaging and a lot of fun. With many choices (do you steal a crew member, protect your own, use your special card(s), lay down crew members/charisma cards or keep them secret in your hand, loot that big pie or go for smaller ones, etc.) you are constantly strategizing what the best move is. From game to game, the setup and different situations are different enough that the replay value of this game is high. We all wanted to keep playing again and again. Pie Rats Of The Carob Bean Farm is definitely a game we will enjoy having in our game collection for years to come.

The game Pie Rats Of The Carob Bean Farm should come with the following components. These are based off of the original game and don't include components from any expansion packs or different editions.

You be the winner if you are found with the most points at the end of the game.

Share with us your comments, funny stories, tips, advice, strategies, creative ways to play, questions about how to play, problems with the directions or anything you want about Pie Rats Of The Carob Bean Farm. All submissions will be reviewed within 24 hours.

Brandon says:
A friend told me about this game and I'm excited to be able to play it. It's on my birthday list so hopefully it will be in a nice shiny box with a bow. I like strategy card games like this. Looking forward to it.
©2023 Board Game Capital - About Us