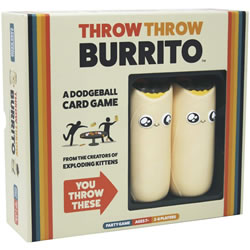 Incoming squishy burrito! Sharpen your reflexes and get ready for a card battle like none other. You'll soon be hurling burritos and having them hurled at you in this crazy game. Can you dominate enough to win two rounds against your components to become the champion? Will you instigate an all out war? Can you collect the right cards without being nailed with a burrito?

Throw Throw Burrito is a fast-paced, action-packed game that combines elements of dodgeball and collectible card games. Be sure to put away any breakables in the near by proximity because things are going to get crazy. The objective of the game is to collect sets of matching cards while avoiding being hit by flying burritos.

During the game, each player starts with a set of cards, which they can use to collect sets of matching cards. On their turn, players can either draw cards, play cards, or throw a burrito at an opponent. If a player is hit by a burrito, they must give one of their cards to the player who threw the burrito. The first player to collect a set of three matching cards wins the game. Players can also play special action cards that allow them to steal cards from opponents, or protect themselves from burritos.

Throw Throw Burrito is a game that can be played by 2 to 6 players. It's a fun game that combines elements of dodgeball and collectible card games, with a bit of a twist. It's a great game to play with friends, family and is recommended for ages 7+. It's a fast-paced game that requires quick reflexes and strategic thinking. See what all the talk is about and join in the fun with Throw Throw Burrito. Grab your copy and add it to your collection today.

The game Throw Throw Burrito should come with the following components. These are based off of the original game and don't include components from any expansion packs or different editions.

If you can successfully win two rounds by scoring the most points then you'll be the winner.

Please keep in mind that the official Throw Throw Burrito rules and instructions could be different depending on the game version you have. The rules below are some of the exact directions that came in the original packaging and will teach you how to play Throw Throw Burrito. Download these original PDF game rules or print them for later use.

Share with us your comments, funny stories, tips, advice, strategies, creative ways to play, questions about how to play, problems with the directions or anything you want about Throw Throw Burrito. All submissions will be reviewed within 24 hours.

Jose says:
Oh my goodness, what a crazy funny game. Seeing and hearing these burritos bounce off the walls is hilarious not to mention it's a pretty fun game too. We quickly learned how to play as a group and played for hours. Lots of fun.
©2023 Board Game Capital - About Us